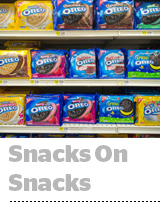 That fact has boosted Mondelēz, despite the coronavirus crisis and economic downturns. And, unlike in previous recessions, Mondelēz is investing to win market share, instead of cutting spend to protect the bottom line, CEO Dirk Van de Put told investors on a quarterly earnings report on Tuesday.

Some brands and investments are being hit. Mondelēz owns the gum brands Trident and Dentyne, which Van de Put said are often cut first by consumers during economic downturns, and especially now because gum is bought on the go, not in grocery carts or online orders. The company’s global travel business, which does a few hundred million dollars per year, has seen a significant decline.

But Mondelēz isn’t reducing overall marketing investments. It’s reallocating to where market share gains can be made.

“This is a moment to really, what I would call, attack the market in the second half,” Van de Put said.

CPG and food marketing is heavily indexed to non-media channels such as retail trade programs (in-store marketing) and sponsorships – the Mondelēz brands Oreo and Nabisco had Olympics sponsorships deals, for instance.

Mondelēz is taking those savings and reinvesting heavily in working media, Van de Put said. The company’s previous guidance for overall marketing spend this year isn’t changing, he said, but it will be heavier in the second half and with paid media channels.

In-store placements have less impact when people are strictly shopping off lists or queuing up orders online – not to mention the disappearance of on-the-go snacking purchases. So you need media campaigns that put products in consumer’s heads and on grocery lists.

“There are a number of changes that our marketing people need to go through. The first one is to understand the mindset of the consumers, and we’ve already started to adapt the communication surrounding our brands,” Van de Put said.

For example, In China, where coronavirus-related consumer trends and ad campaigns have had more time to play out, the Oreo brand saw an uptick in sales after a strategy change to focus its messaging on how Oreos could be incorporated into dessert recipes.

The company also provided a strong hint about how it will change messaging in North America, where Mondelēz is seeing its growth – sales in Europe were up by about 1.3% from last year, but revenue declines in Latin America and EMEA were balanced out by 15.1% annual growth in North America.

“Sharing a snack with your kids as everybody is sort of cooped up in the house brings back a feeling of normalcy and of togetherness calming everybody down,” Van de Put said. “We see (consumers) quote that as a big reason for increased snacking.”