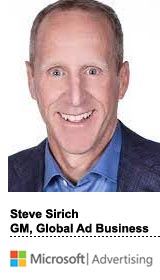 Microsoft hosted its Elevate partner event earlier this week, when the advertising industry was still recovering from Apple’s roundabout announcement confirming the start of ATT enforcement.

But there is news that isn’t Apple-related.

Microsoft released a bunch of ad products at its event, including new formats such as video ads that appear in search results, coupon and price comparison units for people using Microsoft’s Edge browser and a verticalized ad units for auto sellers, travel and tourism brands and hotel companies.

All of those industries have been hit hard by the pandemic, but Microsoft Advertising wants to get ahead of the post-pandemic comeback.

Microsoft also introduced the ability for US and UK-based marketers to import up to 10,000 campaigns from Facebook.

You can read about the full list of product launches in this blog post. AdExchanger went a bit deeper with Steve Sirich, GM of Microsoft’s global ad business.

Microsoft Advertising has gone through a number of changes. How is it structured?

Microsoft Advertising has three types of “experiences,” Sirich said, the first of which is basic display.

The second is what Microsoft Advertising calls its “native experience,” although that description is somewhat confusing because it refers to more than just formats that blend into the content. In Microsoft’s world, native lets advertisers tap into much richer signals related to consumer intent that are derived from Microsoft’s Bing search engine.

“You’re taking advantage of all the first-party data and signals of that offering, and you’re provided with much more contextually relevant information through assets like Microsoft News, the Microsoft Outlook experience or mail experience and through the Microsoft Edge experience,” Sirich said.

These combined consumer signals power the Microsoft Audience Network, which launched in 2018.

The third experience is search, which also uses similar consumer intent signals, but for search advertising, of course.

Does data from Windows and Xbox also contribute to these experiences?

Sirich didn’t deny it, but didn’t confirm, either. He said the consumer services that contribute to the data signals that inform Microsoft Advertising are the ones listed above: the Edge browser, the Outlook email tool, the Microsoft News aggregation service, Bing search and LinkedIn.

Can these ads be purchased directly through a DSP?

Microsoft Advertising’s primary sales channel is direct sales, Sirich said, and advertisers can buy display, native and search individually or as a bundle.

How is Microsoft Advertising reacting to the changes rocking the way online identity is processed?

“When we think about the future of the industry, it’s really grounded in the belief that the web should continue to provide privacy, transparency and control,” Sirich said. “But at the same time, it’s our desire to make sure that we preserve the advertiser ecosystem and the value behind that.”

Sirich said Microsoft is trying to strike the balance between consumer empowerment and the health of digital advertising. For instance, Microsoft submitted a Privacy Sandbox proposal called PARAKEET which aims to do just that, Sirich said.

Google Chrome’s push to keep the ad auction in the browser would break the way current ad tech solutions function. Microsoft’s PARAKEET proposal suggests that the Chrome browser anonymize user identities and pass addressability signals to the auction – which would remain within the ad exchange.

“And it’s transparent to the consumer, who’d know what cohorts they’re associated with and can opt out,” Sirich said. “But, again, we’re in early discussions around the proposal.”