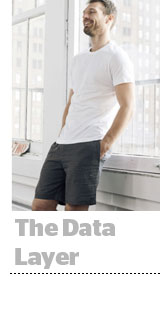 Direct-to-consumer, digitally native startups like Mack Weldon own their own data and don’t rely on middlemen.

Those two huge advantages enable them to track marketing effectiveness with greater precision than their brick-and-mortar counterparts. But to do so, they need platforms that allow them to use every piece of information they can collect about their customers.

Content recommendation engines, such as Taboola, provide a place for Mack Weldon to reach consumers in a variety of ways. The retailer promotes internal blog posts and individual products and amplifies branded content posts through the platform.

“Taboola is the closest thing we have today to what display ads were four to five years ago,” said Zach Jacobs, director of marketing at Mack Weldon. “Then, there was more opportunity in the direct-response space to do ROI-positive display [banner] buying.”

However, Taboola hasn’t always been the easiest place for advertisers to buy.

“For a long time, they were a publisher-first network,” Jacobs said. “Now, they and their competitors are trying to play catch-up and create parity with the same tools Facebook and Google have.”

This year, Mack Weldon was an early adopter of Taboola’s Data Marketplace, which allows advertisers to target ads using third-party data from the Oracle Data Cloud, Neustar, Acxiom, Bombora and other sources. The marketplace became available to all buyers last week.

Mack Weldon used third-party targeting data to advertise on a broader range of sites. In the past, it would drop sites if they created too many clicks that didn’t lead to sales, limiting scale. But by layering in third-party data, it can run ads on sites targeted only to high-value audiences, removing those unqualified clickers.

“Not every click is created equal,” Jacobs said. “The data targeting allows us to switch from the old-school spray-and-pray to something more targeted and refined.”

Because of the data marketplace, Mack Weldon now continually tests new segments. Jacobs can see in his Taboola dashboard which audiences convert strongly on non-targeted buys and create more segments to reach those types of users. And he pulls in audience segments that the retailer already knows perform well from its own insights.

“Scaling Taboola takes a different approach than what we would apply to other channels, just like AdWords doesn’t apply to Facebook,” Jacobs said.

Mack Weldon now runs ads across a broader range of publishers, adding scale to its buys. But it still only uses a brand-safe site list and adds additional site blacklisting where necessary.

“In the past, this might have been a space where there were more brand concerns about where you were showing up next to in the module,” Jacobs said. “But as we have seen more premium brands and smaller brands in our digitally native space leveraging [content recommendation engines], we put more emphasis on making it a bigger piece of our strategy.”