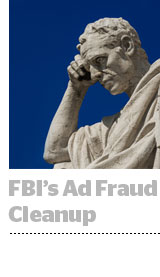 When people learned in 2014 that ad fraud was a $6.3 billion problem, many asked why no one had been arrested for stealing all that money from brands. Four years later, that day has arrived.

“Finally, somebody gets arrested for this,” said Neal Richter, chief architect of Rakuten Marketing Platform.

The FBI charged eight people for carrying out for a multimillion dollar ad fraud operation (read AdExchanger’s coverage here). Google and WhiteOps led the charge on the investigation, with participation from Adobe, The Trade Desk, Oath and Amazon Advertising, according to BuzzFeed, which first reported the ad fraud scheme.

“Adobe is proud to stand with industry partners to help protect marketers from ad fraud," said a spokesperson for Adobe Advertising Cloud.

The FBI is on a roll, following its October launch of an investigation into US media-buying practices. Whether by coincidence or indicative of the timing needed to build a white-collar crime case, that investigation began four years after many marketers first learned of nontransparent practices at an ANA conference in March 2015.

When the federal government starts policing your industry, is that a sign you’re growing up?

“While it may feel weird to celebrate criminal charges as an indicator of industry maturity, that's exactly how we should interpret this: With more spend coming in to digital channels, fraudulent behavior can rapidly erode consumer trust,” said Ana Milicevic, principal and co-founder of Sparrow Advisers. She found the charges “encouraging.”

“Like many industries before it, the fraud and corruption had to get to a point that the feds have to step in and do something,” he said.

But Fou doesn’t think they will serve as a deterrent for future criminals.

“These were the low-level mules that were sacrificed for appearances, while the rest of the ‘Pablo Escobar empire’ continues without even skipping a beat,” Fou said.

It’s unlikely that many digital advertising players will trumpet these arrests to their clients. One of the reasons ad fraud persists is because few want to admit that they lost a client’s money to a fraudulent publisher or that a platform trafficked ad fraud through its system.