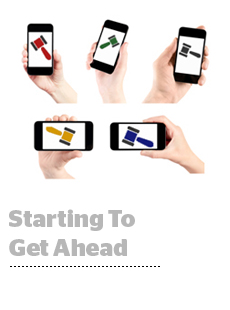 Header bidding-enabled ad spend is on the upswing thanks to mobile. And though it’s still early days for in-app header bidding adoption, that train’s just about ready to leave the station.

The number of mobile impressions transacted through unified auction technology increased more than 110% year over year in the first quarter of 2018, according to PubMatic’s quarterly mobile index, released Tuesday.

Most of that growth is coming from the mobile web, said Kelvin Pichardo, senior director of product marketing at PubMatic. But in-app solutions are starting to gain traction with publishers.

“The technology limitations are becoming less and less,” Pichardo said, pointing to the rise of server-side solutions.

Even so, parallel bidding is nascent in the app space, despite an explosion of new solutions. Google’s AdMob, MoPub, Oath and a host of third-party mobile monetization platforms are either testing unified auction tech or have recently released an offering.

Publishers are interested and experimenting, but a few barriers are hindering widespread adoption, said Boris Logvinskiy, head of product at MoPub.

One reason: Some ad networks are slow or reluctant to move away from mediation and the comfort of a secure spot in the waterfall.

“There are many ad networks that do not yet have the technology to participate in header bidding,” said Freddy Friedman, chief product officer at mobile monetization platform Smaato. “While header bidding is great for publishers, it isn’t always ideal for demand partners in terms of supply path optimization.”

Another reason for the lag: App publishers may be tantalized by the prospect of a unified auction, but they need solid evidence it’s going to net them more revenue before they’ll get beyond the experimentation phase.

“We won’t see the inflection point until [ad networks] have moved to this buying model and publishers have seen the proof points of more revenue,” Logvinskiy said.

But some mediation platforms are also dragging their heels on their way away from the waterfall, said Elad Natanson, CEO and founder of app marketing platform Appnext.

“Not all mediation platforms support [header bidding for in-app inventory] – not all of them have an interest to do so,” Natanson said. “And the ones that have released a solution see slow circulation which require SDK updates.”

But despite roadblocks, savvy early adopters are jumping on board now, said Dan Sack, CEO of MAX, a company that helps app publishers sell their inventory programmatically. In-app header bidding has the potential to hit the mainstream within the year, he said.

“We're seeing sophisticated publishers with tremendous scale wanting to move most quickly,” Sack said. “We’ll all know by the end of 2018 if pubs are better off shifting more/most of their buyers to programmatic pipes and bidding layers – and I think we’ll find that they are, in fact, better off.”

Oath, which rolled out an updated version of its unified auction tech in March, has seen strong year-over-year header bidding growth across all formats and platforms, and Patrick McCormack, VP of publisher sales, is bullish on in-app.

“This model is proven in desktop and will offer developers the same benefits of increased yield,” he said. “Word is spreading quickly in the app ecosystem and it’s just a matter of time until we see widespread adoption.”