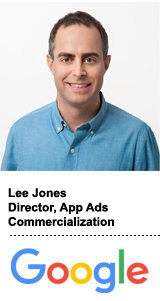 App advertisers used to have to run six or more campaigns at once with Google to try and achieve a single objective.

But, as of November, there’s been only one way to promote apps across all Google properties: Universal App Campaigns.

Google first tested the offering in 2015 and now it’s the default campaign type for app advertisers.

Advertisers provide Google with text, a few creative assets, the marketing objective, a starting bid and a budget, and the algorithm takes it from there. The whole process is automated. Google creates the ads, serves them across the Google network and uses machine learning to dynamically adjust keywords along the way.

“You tell us the business outcomes and we find the people we believe are in-market using all of the signals Google has at its disposal,” said Lee Jones, Google’s director of app ads commercialization.

Google is even gaining market share from Facebook, the undisputed king of the app-install space, growing its slice of the pie by 40% over the course of 2017, according to AppsFlyer’s most recent performance index report.

But there are still some kinks to work out, namely reporting and more control. Advertisers can’t specify where their ads show up in Google’s ecosystem and don’t have insight into why certain placements were chosen.

More transparency is on the agenda, Jones said, with plans to gives app developers a peek inside the black box.

AdExchanger: What was the motivation behind overhauling app promotion?

LEE JONES: With the millions of signals you get on mobile, it’s very hard to do manual optimization – not to mention having to do separate tracking for mobile web and in-app. What’s good about Universal App Campaign is that we’ve leveled the playing field so that smaller and medium-sized customers can afford to run app-install campaigns.

I have heard grumbles from some developers that they’d like more control over placements.

It’s funny to hear people give that feedback now. The reason we did this is because people were saying it was too complicated before. But we’re dedicated to listening to the market. That’s what drives our product strategy.

We’re working on providing a value distribution curve that gives more details on what happened. For example, we could tell someone: “Well, we got this many search conversions for you, then we tapped out on search, so we graduated you to YouTube and it was a little more expensive, but you also got more volume.” People want to know what the machine is doing.

How does machine learning come into play with Universal App Campaigns?

We can look at user attributes agnostic of the channel. It’s like being able to enter five auctions at once. Say someone just downloaded three games in a row and we know that person is about to get on an airplane. We can use that information to show an ad on YouTube we think is really relevant for that moment. It’s not something you could do manually and it’s efficient for the advertiser.

For example, the Mayweather fight was really big last year. The fight happened over the weekend, but we were able to automatically start showing related keywords for a sports app we were working with in the UK. It wasn’t even something they were planning to capitalize on, but it drove a ton of value for them.

What’s next on the road map?

A big area we’re focused on is showing which creatives worked, why they worked and who are the people being reached – because that has implications not just for campaigns, but also for content within an app.

For example, I recently met with a grocery delivery company that was mainly targeting millennials. But when we showed them the data, it turned out that 25% of their most valuable customers were over 50.

A revelation like that doesn’t just impact what they do with Google, it impacts their entire marketing and how they tailor their paths. Because of what they learned, this delivery app is going to start experimenting with different creatives.

These are the types of tools and insights we’re investing in because, increasingly, it’s becoming much less about what someone might do in, say, AdWords, and more about helping advertisers map their user journey. That’s where smart marketers can get ahead.