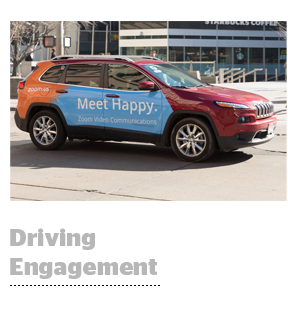 Billboards aren’t a one-to-one media, unless we’re talking about “Three Billboards Outside of Ebbing, Missouri.”

But advertisers are starting to inform their online retargeting efforts with offline exposure data.

Newer players, like car-wrapping startup Wrapify, are also popping up to help bridge the gap.

Wrapify pays people to encase their vehicles in branded vinyl graphics and drive around town – so its tactics are completely old-school – but it launched a tool in February that lets advertisers extend their OOH impressions online.

Through a partnership with out-of-home analytics company Mira, Wrapify captures all the device IDs near wrapped cars during a certain time period in a geofenced area. Mira passes the IDs to attribution provider Barometric, which matches them to cookies. Advertisers can use the combined data set to create online segments of people exposed to wrapped vehicles on the road.

It’s not 100% accurate – some of the devices pooled into the audience could belong to people who didn’t actually see the ad even if they were in the vicinity of a Wrapify car – but it’s not meant to be an exact science, said Matt Fusco, SVP of business development and operations at Barometric.

“It’s good directional data about exposure,” Fusco said. “And it’s the sort of information brands need if they’re going to jump on board with something like this.”

In a little over two months, the campaign generated 18.5 million out-of-home impressions in the geofenced zones, and by the end of February, Zoom was able to deliver retargeted digital display ads across desktop and mobile to nearly 120,000 people in its offline exposed audience.

“I believe in frequency, and this is something we can layer right in,” said Janine Pelosi, Zoom’s head of marketing.

Frequency is particularly important in travel marketing, where the booking journey can include as many as 16 different touchpoints before someone finally makes a purchase.

In 2017, Fareportal tested Wrapify cars in the New York metro area to promote a product launch. This year, it’s planning to weave offline-to-online physical retargeting into its mix.

“Most consumers need to be nudged repeatedly before they make a decision,” Moore said. “That’s why retargeting is so important for us. We’re trying to take the ultimate unattributable tactic – branding – and make it attributable.”

Together, location data and digital retargeting can be a potent combo. Consumers exposed to an out-of-home ad are 48% more likely to react to a similar ad on their phone later, according to UK-based OOH researcher Ocean Neuroscience.

“Think of out-of-home as a big canvas in the real world that helps prime consumers with a message,” said Jodi Senese, CMO of Outfront Media, which partners with GroundTruth to geofence locations and create behavioral audience segments. “If you can drive awareness at the top of the funnel and click-throughs and attribution at the bottom, that’s when brands really win.”

Take TNT, which ran billboards and bus shelter ads to promote its psychological thriller “The Alienist” late last year. Awareness is good, but what TNT really wants to know is that people are actually watching the show.

Barometric is working with Mira to track tune-in results from the campaign by capturing device IDs near the OOH assets and connecting them to comScore data at the household level.

“Media just needs measurability to prove efficiency,” Fusco said. “We’re trying to measure these channels, but what we’re really trying to do is connect them.”