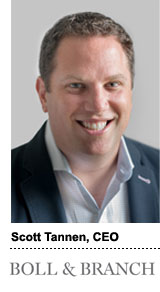 Starting this week, luxury bedding startup Boll & Branch will add TV to its marketing mix, joining many other direct-to-consumer brands.

But the data-driven company is being disciplined, which means using a different strategy than other DTC brands and the traditional marketers that dominate TV. It’s targeting a broad national customer base, not just urban millennials like many DTCs do. And it’s also looking to buy the most efficient TV spots, unlike traditional TV advertisers.

He understands the rigor that traditional brands bring to marketing and customer segmentation, but he’s also adapted that approach to suit a smaller scale startup.

Even before adding TV, Boll & Branch invested in many areas other DTCs didn’t, like radio.

“There are a lot of customers that are underserved by the DTC space,” Tannen said. “Our media mix is much more traditional than a lot of the DTC and ecommerce brands, and it’s one of the reasons we’ve been so successful.”

Boll & Branch is only advertising on TV slots where it can get an efficient CPM. That means Boll & Branch ads will appear on ESPN regional sports games, HGTV shows and news, not network prime time.

“We can’t afford and don’t want to afford the waste with typical network buys,” Tannen said. “I see plenty of companies similar to us buying premium placements on networks. Invariably, I don’t see them six weeks later. They are getting bad advice from people.”

In fact, Boll & Branch sees more value in shows people might watch casually, because they’re more likely to pick up their phone and look up Boll & Branch after seeing the ad slot – another argument to find lower-priced TV placements and dayparts.

“I don’t care what the media is. It breaks down to a CPM,” Tannen said. “You have to have the patience of a card counter, and identify what the right cost is for the audience.”

“I learned from my CPG days that small touches from a creative standpoint can make a lasting impression on the user,” Tannen said. “What big brands get right is production value. We are selling a high-quality product. The ad is a visual representation of your brand.”

The agency LWD worked with Boll & Branch on its TV buy, because media agencies hold better understanding of rates and placements, Tannen said. But Boll & Branch is a strong believer of in-housing its marketing strategy.

“A marketing team that sits six feet from a product development team or a business intelligence team can be much more nimble,” Tannen said. “Leading companies need to own their strategies.”

In TV, Boll & Branch wants to continue to showcase its luxury sheets that it sells affordably and sustainably by owning the supply chain from start to finish. But it will focus on ads that reach viewers who haven’t heard of Warby Parker and the hundreds of other DTC brands.

“So many startups and DTC brands share consumers with each other, so you end up with cross-category competition,” Tannen said. Boll & Branch is thinking outside the millennial box to lay its claim in the increasingly competitive bedding space.