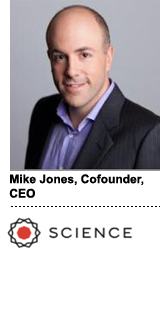 Mike Jones, the former CEO of MySpace, knows a thing or two about driving viral engagement with video.

As co-founder and CEO of startup incubator Science Inc., he was an initial investor in Dollar Shave Club, which rose in popularity with a single video and was acquired by Unilever for $1 billion last July.

Jones has a knack for getting Science Inc.’s marketing investments sold. For instance, Google bought FameBit and HelloSociety sold to The New York Times. But now Jones is looking to build.

“We found through our investment in Mammoth that building applications was not the challenge,” Jones told AdExchanger. “The challenge was figuring out how to drive consistency in audience and how to engage that audience through monetization and content on a high-frequency basis.”

Mammoth Media may never reach YouTube’s or Snap’s volume, but Jones says the key to creating media for a younger demographic is offering them choice – and understanding how they consume mobile content.

“It’s like the very beginning of television where there were only a handful of channels and people kind of accepted whatever was on,” he said. “For teens, there’s Snapchat and YouTube, but I think there needs to be a lot more variety and I don’t think they need to all be monster social platforms.”

Still, it’s a long shot to try and compete with any social platform, especially for fickle teens. But Science Inc. thinks it has nailed a formula that works.

“We’ve been building story-driven applications for three years and a great example of that is Yarn,” Jones said. “Newspapers used to release weekly ‘serials’ of a story, where there’d be an ongoing push and engagement. We believe this was a great format for the mobile phone, so we’ve done multiple iterations of it with our apps.”

Networks that win will be the ones that test and learn and aren’t afraid of killing a good product if it doesn’t catch on.

Mobile formats must be different from the standard banners and pre-rolls to which web publishers have subscribed; those early formats applied the same structure and layout of a broadsheet newspaper to digital environments, Jones said.

“You cannot take traditional web content and throw it into a small screen and believe that you’ve now nailed mobile,” Jones added. “I think traditional publishers are unequipped to win at mobile and Snapchat’s the first to get it right.”

As for Mammoth, it’s starting small and iterating from there – the way its venture startups always have.

It has about a half-dozen editorial team members in addition to its existing network of writers or video specialists who work across other applications. Mammoth also hired Peter Szabo, the former head of US ad sales for Shazam, to lead monetization.

“In the beginning, it will be based on a CPM-oriented ad model because we have to speak the language of the brand and advertising community, but then we’ll start to think about how we do product promotions,” Szabo said. “Maybe we integrate a product in a show on Beauty Bible TV talking about its features in a direct-response approach or maybe it’s a lighter touch that works more for branding.”