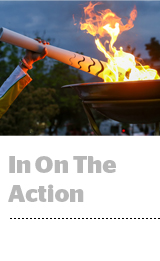 Are you gearing up for the Summer Olympics?

Comcast-owned NBCU culminated its inaugural SportsTech Accelerator program on Wednesday, investing $50,000 in each of 10 startups and blessing those startups with important broadcast activations just in time for the biggest event in global sports and advertising.

Eon Media, a Toronto-based software company that tracks logos and brand impressions during live broadcasts, is one of the NBCU SportsTech startups, and leaves the accelerator program with quite a bit more than a $50,000 investment. Eon now has deals with the US cycling, US Ski and Snowboard and US swimming teams.

The cycling team, for instance, can use Eon’s sponsor exposure data to more effectively position brand logos on their jerseys or equipment during a live broadcast, said Eon founder and CEO Ashish Agrawal.

Olympic teams and athletes get annual ROI reports with granular data on sponsorship impressions in social media, but very little detail on the brand exposure during television broadcasts, Agrawal said.

There are other potential business opportunities across the Comcast family, aside from the Olympics. Eon is pursuing a deal with the Golf Channel, another NBCU property. And Eon technology will also be tested with Comcast Spectacle, which owns the NHL’s Philadelphia Flyers, as well as the Wells Fargo Center stadium in Philly, according to Jenna Kurath, Comcast VP of startup partner development who oversaw the SportsTech investments.

“Which parts of the stadium get the most exposure based on where cameras are placed?” Kurath said.

There’s more contractual pressure on sports leagues and broadcasters to prove the value of sponsorships, so understanding which locations in the stadium have the longest exposure times during a camera cut can be a million-dollar question.

The SportsTech accelerator brings other perks as well. For instance, a few of the startups sell sports clothing or wearable devices; for these, NBCU can also offer Amazon advertising credits.

The startups are part of NBCU’s strategy of embedding itself in more aspects of sports and the Olympics – making Comcast an essential partner, not just a broadcast rightsholder. One startup, XiQ, has a technology that replaces the key ignition in golf carts and other vehicles and updates them with IoT capabilities and remote automation. That tech is paired with NASCAR, an NBCU sports partner that happens to operate fleets of golf carts and vehicles at race tracks. Another startup, Safety Skin, makes body products for cyclists and runners that help to prevent collisions and minimize injuries. The US cycling team will use the Safety Skins as giveaways to expand their membership programs.

The roadmap for both Eon Media and NBCU also encompasses individual athlete deals. Kurath said that NBCU’s data reporting will allow athletes to attribute their own sponsor deals or clothing lines.

“How do you extend your moment in the spotlight when your product is yourself and your athletic ability?” she said. “Being able to give that guidance and have precise data is incredibly valuable to athletes.”