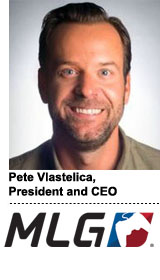 “It’s also created an opportunity for us to bring all our content assets to market, to brand partners and to distributors as a portfolio,” said Pete Vlastelica, CEO of Major League Gaming, who joined MLG last fall after serving as head of digital for Fox Sports. “There was no single organization within the company responsible for representing our e-sports content assets as a portfolio, and now there is.”

It’s not a coincidence that the restructure is happening now. E-sports is becoming big business – with a projected value of $1.5 billion by 2020. That’s even higher than the current addressable TV ad market.

So it shouldn’t come as a surprise that e-sports leagues are pulling out all stops to lure more brand sponsors.

Vlastelica updated AdExchanger on MLG’s monetization strategy and how e-sports will change the concept of “live sports” for both broadcasters and digital partners.

AdExchanger: What’s been the biggest change moving from network sports to e-sports?

PETE VLASTELICA: It feels more like working in offense than working in defense. We’ve got assets and content that are just as valuable as anything we had to work with in TV, but [e-sports is] digitally native.

We’re not encumbered by the pay TV ecosystem, so we get to think about what’s best for the user and brands and design our content and product strategies based on those things, not legacy business models. Even though I was the digital guy at Fox Sports, obviously, I worked for a TV company, which has vested interest in maintaining the pay TV model as the primary way premium TV gets distributed.

How will brand integrations be different, given e-sports’ cult following?

[Like] the NFL, NBA or any other major league, there’s this loyal fanhood. But the opportunity is to co-create content with a brand that really speaks to that male audience – and not just fans of a team or league, but fans of a game itself.

We like producing branded content that lives as an interstitial in place of traditional ad formats. For instance, instead of cutting to a commercial break during a match, we cut to a content feature that is co-produced with a brand.

And that feature, in addition to living inside the live broadcast [on our OTT network], can live on social platforms and on our website. We’re creating this combination that’s like league sponsorship, but which has deep integration to the fans.

Activision Blizzard has a media network and tech stack. Where does data play in the equation?

The combination of traditional pre-roll and mid-roll inventory that’s targeted based on the data we have about our audience is a very interesting opportunity. If you include all of our game titles, we reach 450 million people a month. Google, Facebook and Tencent are bigger, but the list of networks that reach that many people is much shorter.

It’s a gaming network, yes, but no one has really looked at a game distribution network as a broader content distribution network, and that’s one opportunity we’re thinking hard about. How can we create linear, video-on-demand programming that’s relevant to the games, [but carries formats seen in] traditional video advertising? Then it becomes much more powerful, because we can target against really valuable data.

At Fox Sports, you spearheaded the growth of digital and mobile apps, such as Fox Sports Go, and platform relationships with Facebook Live. Is Facebook Live as compelling for MLG viewers?

Because our most valuable content is not trapped behind a pay wall today, we have the opportunity to have conversations with platforms like Facebook and others about distributing our best, most valuable content on their platform. And that’s not an opportunity we had very often at a TV network because obviously, there were programming and distribution relationships that stood in the way of that.

We’re seeing a lot of demand, not just from social platforms but OTT players and even traditional broadcasters in this type of e-sports content. Broadcast sports see e-sports as a way to get younger. That’s what Turner talks about whenever they talk about their e-league. It’s about reaching that demographic of their audience that’s sampling their network content through e-sports.

Do you foresee more broadcast investment in e-leagues or e-sports?

Broadcasters are thinking about e-sports as an asset to build an OTT business around. And the OTT players and social platforms themselves see e-sports as way to get into sports in the first place and leapfrog some of the traditional stick-and-ball sports that are probably locked up for years in deals with networks.

We’re seeing more of a willingness to treat e-sports live event content as what it is – premium live sports content. Across the board, there’s interest, but specific to Facebook – the opportunity here is different than when I was at Fox. We would think about building engaging shows that just live on Facebook Live. But our focus here is really on [more broadly] distributing our most premium content.