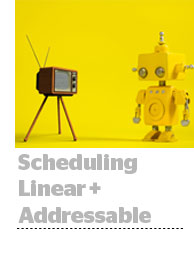 Dish runs a scaled addressable advertising business. But its process to decide whether to run a linear or addressable ad was highly manual.

Staff used spreadsheets and spent two to three weeks just to schedule a single week of advertising. And managing yield – like figuring out whether an addressable or demo-based linear ad should run in a given spot – was imprecise.

Since mid-May, Dish has piloted a product from Comcast’s FreeWheel designed to automate elements of that scheduling process. Both companies see it as a prelude to further automation and sophisticated yield management in TV advertising.

“We ingest all their data and make a recommendation on whether a spot would be best served by being an addressable ad or a demo-based linear ad,” said Geoff Wolinetz, head of revenue at FreeWheel.

A given spot may not be eligible for an addressable ad, for example, because it doesn’t have the right audience. In other cases, the system might predict an addressable ad can bring in more money.

Dish improved yield, which increased revenue, though the companies declined to share specifics.

And Dish can ensure its inventory is in its optimal place to drive performance for clients. That means placements that can meet rating and impression goals as well as control reach and frequency, said Kevin Arrix, senior vice president of Dish Media Sales.

This article has been updated to clarify how the inventory allocation tool optimizes.