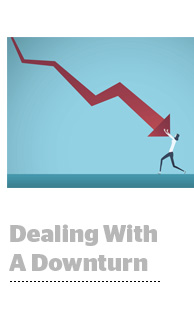 The economy is a roller coaster. It’s up, it’s down, it does a loop-de-loop.

A downturn isn’t guaranteed, but there’ve been enough rumblings that people are waiting for the other shoe to drop. The last recession in 2008 catalyzed some change in the industry – but that happened at a time when programmatic and the digital advertising ecosystem were much less mature.

So what will happen if things take a turn for the worse? AdExchanger examines how publishers, agencies and vendors may fare.

During the 2008 recession, brands demanded more from publishers and forced them to innovate in how they drove performance – which yielded long-term benefits.

“The last recession made consumers much more value-focused and pushed ad buyers to become more demanding as well, with an increased emphasis on performance,” said Stan Pavlovsky, president of Meredith Digital.

The focus on value is a good thing for digital, data-driven advertising, added Erik Requidan, VP of sales and programmatic at Intermarkets.

“Digital is often more affordable than most other legacy mediums. Those [legacy] mediums have also become more digital – so everyone may actually be able to benefit a bit,” Requidan said.

But back in 2008, programmatic was just getting started and Facebook and Google commanded a smaller share of the advertising pie.

The environment is much different today. Facebook and Google dominate. Amazon is emerging as a powerhouse. And the mobile app ecosystem has matured. So buyers could flee to the platforms’ cheaper scale, cutting out other media publishers.

“I don’t think there are any comparisons to be made to last recession,” said Hanna Kassis, founder and CEO of OAREX, which helps small publishers get paid more quickly. “We don’t know how mobile game developers will do during the recession, because most people weren’t playing Hearts on their iPhone in 2008.”

As consumers and media buyers alike look for ways to save money in a recession, success will mean “thinking more like direct marketers, not just brand builders,” Meredith’s Pavlovsky said. “Media companies will have to focus on two things: delivering superior performance through proprietary first-party data and ad products, and diversifying revenue beyond media sales by delivering value directly to consumers.”

When agencies go through a recession, they face more pressure from cost-cutting clients. But they’ve traditionally adapted to working in a muted economy.

“Agency fortunes depend on what clients are willing to pay,” said Adam Smith, futures director at GroupM. “The fact remains that advertising is a convenient cost to cut – simpler than layoffs and closures – and immediately lifts margins.”

For most clients, experimental budgets will be first to go by the wayside during a recession. But in sectors like fast-moving consumer goods, clients have already cut back so heavily on agency fees that it could be difficult to pare back much further without sacrificing quality, said former Pivotal Research analyst Brian Wieser. (Wieser is now global president of business intelligence at WPP’s GroupM.)

Brands like P&G already planned to cut $400 million in agency fees last year. At the same time, holding companies are adapting to the cost-cutting and investing in services that position them for the future.

Also, expect to see more holding company re-orgs during a recession, which could lead to more layoffs, Smith said. He added that M&A opportunities could arise around acquiring talent individually, rather than “buying it in wrappers of readymade brands, cultures and structures.”

Agencies are already streamlining talent and production costs on their end by offshoring talent, a trend likely to accelerate in a recession. Publicis Media, for example, employs 10,000 STEM graduates working on product design, experiential marketing and customer solutions in India.

So given the necessary restructuring that agencies and publishers will have to undergo, where does that leave vendors?

Those focused on data and analytics are the most advantaged. Expect more investments in data and creative, said Laura Gurski, senior managing director of Accenture’s consumer goods and services practice.

And as brands in-house media, they tend to be more targeted and less reach-oriented.

Yet, the desire to pare down vendors is a consistent theme among consumer brands, as is the need to get more value per dollar spent, said Michael Klein, Adobe’s director of retail industry strategy.

So, if our economic roller coaster plunges, we may see fewer vendors getting off at the end of the ride.