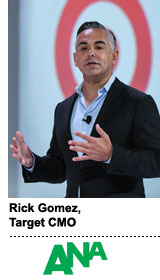 The use of data in creative messaging has been talked about for years. But marketers are finally acting. At the ANA Masters conference in Orlando, Florida, last week, they showed how they create relevant messages and drive growth by using customer data.

Marketers want data analysis to be “always-on,” instead of through formal market research interviews conducted periodically.

And many marketers from companies like Target, Anheuser-Busch and Bank of America are scouring social media and their customer data to understand consumer wants, and create relevant creative that drives business results.

But data itself isn’t enough – it’s all about how it’s applied.

“The future is about data-driven storytelling, it’s not about data. Nobody can differentiate on data,” said Rishad Tobaccowala, Chief Growth Officer of Publicis, to a group of attendees. He emphasized that brands should seek to understand their customers overall, not just “the lens of a brand.”

“I don’t define myself through the lens of a brand,” he said.

Here’s how Anheuser-Busch, Target and Bank of America use data to inform how they interact with their customers.

“People won’t pay attention to us if we don’t pay attention to them,” said Anheuser-Busch CMO Marcel Marcondes. He described the beer company’s previous approach as a safari – where they would gawk at customers like animals once a year through binoculars, marveling at the fact that they ate, drank and moved.

Now, the beer company uses a data analytics team that transforms data into insights on a daily basis – and its fast cadence is critical, Marcondes said.

Natural Light, for example, is a beer consumed by many college students, but sales were in decline. So the team decided to look at students more holistically, beyond the stereotypes of typical college partying. Using their data analytics team, they realized the crushing cost of college was a huge part of the current college experience.

So Natural Light created a campaign speaking to that insight. It gave away $1 million last year to students who made videos about why they wanted to pay off their student loans. The contest worked – and returned the brand to positive sales growth when it had been shrinking.

“It’s about showing we care about consumers as people,” Marcondes said – and not, as Tobaccowala emphasized, thinking of them only in terms of their consumption of an item.

Target is listening to customers in order to return to growth – one factor behind the company’s strong sales and digital growth, as well as its recent rise in stock price.

After CMO Rick Gomez joined Target, he killed the company’s loyalty program, Red Perks, a “difficult message to deliver” to the board, he said.

The new program, Target Circle, offers benefits to both infrequent and loyal Target shoppers. When they use the program, they give back to local charities they pick, and it features personalized perks. Target developed the program after talking to its customers.

In six test markets, it amassed 2 million active members and gave $1 million to local charities, Gomez said – setting it up for success as it expands nationally this fall.

As part of its customer-led approach, Target’s latest ad is crafted from consumer-generated content, showing phone-shot videos of people having fun while shopping at Target.

Bank of America’s challenge has been turning around its image after the great recession – along with merging disparate product lines and folding Merrill Lynch into Bank of America. (It goes by “Merrill” now)

With more than 60 million customers and a full suite of banking options, from checking to savings to investment accounts, Bank of America wanted to focus most on serving its current customers better and more deeply.

“We have 25 million touches a day with our customers. Let’s understand that data, what our customers want and use it to make our customers’ lives better,” said Bank of America CMO Meredith Verdone.

The company used to run focus groups with consumers behind a one-sided glass. But it changed that approach and brought executives face-to-face with customers in 30 cities to help them understand customers better.

The focus on data also meant that Bank of America had to slow down. Six years ago, it created an ad starring the CEO as he commuted to work in a car and talked about helping the people he saw on the other side of the car window. The ad never ran – because data showed customers weren’t ready to trust that kind of positive message coming from a bank leader. “You have to overprove yourself,” Verdone said.

Now, Bank of America is seeing consumers increasingly trust experts over social media, in part due to the fake news and misinformation on the platforms, Verdone said – an opportunity the bank can seize now that it’s listening more closely to what customers want.