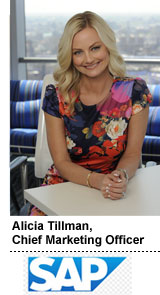 This week, the enterprise tech company SAP ran a native ad on “Jimmy Kimmel Live!” in the form of a skit, where Kimmel’s assistant Guillermo showed how SAP made his life better.

The spot wasn’t an obvious choice for the B2B brand. But Chief Marketing Officer Alicia Tillman made the decision after data showed SAP needed to reach a broader audience.

SAP’s marketing traditionally focused on enterprise decision-makers, like a chief information officer or a chief financial officer. But increasingly, SAP saw more varied titles visiting the site and signing up for webinars.

Its salespeople saw the same thing. CFOs or CIOs often brought other employees – including those who would actually use one of SAP’s products – when they made their decisions.

That data justified the push to bring the brand to a broader audience. “Buyers are influenced by every job title that is a user of that tech: the average employee, their kids, next-door neighbors, journalists, celebrities,” Tillman told AdExchanger. So it wants these groups to know about SAP too.

SAP has a reputation of engaging with consumer audiences, even when it’s mostly a B2B play. Earlier this year, it partnered with Karlie Kloss, a model who’s also an advocate, to teach girls how to code. And in 2018, it started working with actor Clive Owen as a spokesperson to deliver its marketing messages.

But Tillman doesn’t just want brand recognition. She wants SAP to be more human and relatable, because campaigns that lead with emotion perform better than ones that list product features, according to data from 1,400 ads.

“Yes, you have to have high-quality differentiated products, but you also need to connect with consumers emotionally,” Tillman said.

SAP’s board knows about the data behind a media strategy before a campaign goes live, and Tillman can quickly adjust as dynamics change unexpectedly, such as with a product that’s underperforming or a new product launch. A key metric is how the SAP marketing generates leads.

“In the B2B business, one of the biggest dependencies they [the larger organization] have on us is pipelines. We need to make sure that the media mix we have is generating the amount of pipeline that’s needed,” Tillman said. Monthly analysis means she can adjust strategies more quickly.

And it’s her belief that the emotion-led marketing of SAP is going to help close more sales. “You want to buy from people you like, that you feel have the same values and have a sense of humor,” she said. “The same thing holds true with brands.”