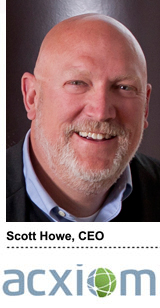 Acxiom’s 2017 Q4 performance was better than expected, as CEO Scott Howe’s plans to turn the company into a data infrastructure provider started to take form. Read the release.

That transformation was evident in the company’s 2017 Q4 and full-year earnings report, released Tuesday. Acxiom earned $225 million in quarterly revenue, which was flat compared to the year before, and $880 million in total revenue, a 4% increase over 2016. These figures were in line with Acxiom’s past guidance, and slightly above analyst expectations.

Much of the transformation hinges on Acxiom’s Connectivity unit, which launched when Acxiom acquired data onboarder LiveRamp. But LiveRamp has changed considerably since Acxiom bought it.

Earlier this month, LiveRamp helped start a consortium that will create a single identity standard for use across multiple ad exchanges and platforms.

In the past year, Acxiom has invested heavily in Connectivity with the acquisitions of Arbor and Circulate and the development of IdentityLink, which is designed to resolve identities across online and offline channels.

LiveRamp has also iterated IdentityLink for different stakeholders, including marketing tech vendors, publishers, brands and agencies. It also provides the infrastructure so data owners can sell their data across numerous platforms with one contract.

While LiveRamp competitors argue its association with Acxiom undermines its neutrality, Howe emphasized the opposite during the earnings call: “Our goal is to provide a neutral data framework that benefits everyone.”

Quarterly revenue for the company’s third leg, Marketing Services, decreased 17% YoY to $94 million, and dipped 9% for the year to $411 million. This decline was due to the divestiture of Acxiom’s email marketing unit, which it sold to Zeta Interactive.

Going forward, Acxiom’s growth is centered around three areas: new client adoption, most of which is coming through Connectivity and Audience Solutions; growing the use cases for Acxiom data and services; and geographic expansion.

Howe also hinted at a fourth expansion area, one that Acxiom has just begun thinking about: expanding its services beyond marketing.

Acxiom’s focus on “identity resolution, connectivity and data stewardship” has created this potential, but don’t expect it to happen next year.

“This is about creating a growth trajectory that expands decades,” Howe said. “We’re in the really early stages of assessing the opportunities.”