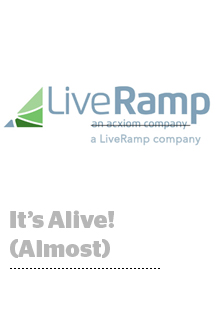 Acxiom had a solid quarter – although it would have been a bit more solid if it still had its Facebook relationship.

On Thursday, the company reported earnings for its fiscal quarter ending June 30, with total revenue clocking in at $227 million, up 7% year over year. If Partner Categories, Facebook’s now-retired feature for third-party targeting through its platform, were still a thing, however, growth would have been 13%.

But onward and upward.

Acxiom’s $2.3 billion sale of its Marketing Solutions business to IPG will close sometime before the end of October, subject to shareholder approval and all the usual boxes that must get ticked after an acquisition.

Once that happens, Acxiom will change its name to LiveRamp and continue life on the public market under the RAMP ticker.

Revenue for the LiveRamp division was $62 million for the quarter, up 34%, although growth for the segment would have been 44% without the headwind from its Facebook loss. Regardless, LiveRamp’s annual revenue run rate was approximately $250 million as of Q1, and gross margins improved 71% from this time last year.

With AMS shortly heading off to its forever home with IPG, Acxiom CEO Scott Howe spent a good chunk of time laying out the main areas that LiveRamp plans to focus on to sustain its future growth: adding new clients and expanding existing relationships (of course) and new initiatives within LiveRamp, including addressable TV and Data Store, the data marketplace feature within LiveRamp’s IdentityLink product.

“TV is an $80 billion market in the US alone and one of the least sophisticated when it comes to data-driven targeting and measurement,” Howe said, noting that Acxiom’s TV-related revenue doubled year over year and that its addressable campaign volume increased by more than 100%.

Admittedly, that growth is off a “fairly small base,” Howe said, but there’s no reason that data-enabled TV spend won’t explode over the next decade as buyers who cut their teeth in digital start to take the reins.

But, what about the General Data Protection Regulation? There’s no way to get through an earnings call less than three months after the GDPR enforcement date without addressing the European privacy regulation’s impact on revenue.

Howe said Acxiom’s two solid years of GDPR prep paid off. Although match rates were “slightly impacted” in some markets as Acxiom remediated and removed noncompliant mar tech partners from its network, they’ll likely stabilize by next quarter. He expects international revenue to grow by double digits in 2019 and hit at least $25 million.

“Brands are not abandoning data-driven marketing across Europe – when it’s done ethically,” Howe said. “Some of our most innovative solutions, like second-party data sharing, are originating from international. We’re bullish [that] international will continue to be a growth driver for us in the near and medium term.”