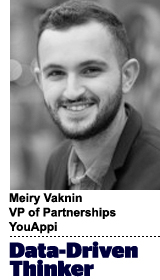 Today’s column is written by Meiry Vaknin, vice president of partnerships at YouAppi.

With Amazon having joined the Google and Facebook duopoly as the platforms dominating digital marketing, could new or old players be preparing to challenge the triopoly?

I’m talking about the device manufacturers.

In January 2010, the device manufacturers were seen as a potential threat, when Apple acquired mobile ad network Quattro (which was on the same day that Google released its first Nexus phone). The Quattro acquisition led to the rollout of Apple’s iAd program, which was ultimately shuttered in 2016. Though Google now markets Pixel phones, tablets and laptops, my guess is that regulatory concerns will keep Pixel a relatively small player in the global consumer electronics market.

The reasons behind these moves are clear. First, device manufacturers are facing declining margins. Users in the Americas, Europe and most of Asia already own smartphones, and they’re upgrading to newer models less frequently due to the relatively minor improvements in subsequent models.

Phone manufacturers are also heeding the lessons learned by computer manufacturers such as IBM and Dell, which either added other ancillary services (Dell) or sold off their PC units (IBM) when margins declined.

Device manufacturers, most notably Samsung and LG, have created game launchers that consolidate each user’s games in one place and make it easier to recommend future games and offer game-related incentives and advertising. Given the endless growth in games, this can provide the device manufacturers with a strong and growing revenue stream. Starting with launchers and other utilities, device manufacturers will undoubtedly increase their app development and integration according to the usage patterns of the phone’s hardware.

A third reason for device manufacturers to enter the advertising space is the abundance of privacy-friendly data that resides on mobile devices. There are 14 sensors on a typical smartphone, including GPS, Bluetooth, accelerometer, gyroscope, Wi-Fi, barometer and magnetometer. These sensors provide signals that enable technology from companies such as Anagog to understand where you are and what you’re doing. Anagog’s technology analyzes the necessary data on the phone and sends on only the marketing signal, without any personal information leaving the device. Imagine if Nike could target users based on their location and how many miles they run or bike every week?

Beyond the advertising opportunities, the addition of software for these hardware manufacturers enables them to increase revenue while enhancing relationships with users by attaining a better understanding of their interests, needs and usage patterns. A second benefit of the apps and app store is the information that device manufacturers derive about their users’ usage patterns and interests, which can help them develop better, more relevant features for future phones. For example, a phone model with a relatively large percentage of photo editing app downloads and use might lead that manufacturer to improve the camera functionality in future models of that phone.

If there is one device manufacturer that should excite Madison Avenue it’s Samsung. The company is currently working with marketers in the smart TV, smart appliance (including refrigerators) and mobile ad (smartphones) divisions, but it’s clear that Samsung will soon offer marketers cross-device opportunities. Samsung has one unified operating system across all devices, according to Michael Scott, Samsung Ads’ head of brand sales in North America, and it has already done a cross-household device deal that includes Samsung smart TVs and Family Hub refrigerators. With Samsung the leader in both TV and home appliance sales in the United States, and second behind Apple in smartphone sales, the cross-device opportunities are compelling.

Situated in the kitchen – the heart of the house – Samsung Family Hub refrigerators offer an interesting marketing use case. With a range of apps, including Instacart, Grubhub, Amazon Dash, Spotify and Uber, as well as Samsung’s own shopping list and view inside the applications, this refrigerator provides real end-user utility.  And in the not so distant future, users might be happy to sign up for a service that would enable them to add milk to their shopping list when there is less than one carton of milk in the fridge. I sure would.

As with all things in digital advertising, scale matters. For device manufacturers such as LG and Samsung, their range of electronic devices will provide more opportunities to serve ads and collect greater data about their users.