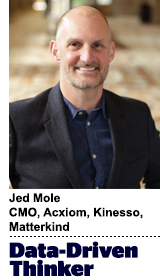 Today’s column is written by Jed Mole, CMO of Acxiom, Kinesso and Matterkind.

Data is the language of technology we use every day. The connection with a long-lost pal over social media. The convenience of ordering a meal and having it show up where you are. The ability to stream endless entertainment, much of it for free. The ad for luggage timed just right with an upcoming trip. All made possible by data.

But those fundamentally opposed to data use, coupled with sensationalized media stories, have played on the public’s lack of knowledge – creating an environment of fear, mistrust and misunderstanding. To them, the answer is to lock data down to such narrow use cases and limited players that the innovative data environment we experience today would simply become a relic of the past.

The reality of how data serves people is lost to conflation. There is a general misconception that data is dangerous, so therefore all companies that use it are dangerous. The good actors have become conflated with the bad, and good data use with misuse – it’s all lumped together.

So how do we untangle this mess?

First, it’s important to understand there is a wide spectrum of data, ranging from nonsensitive – like the kind of car you drive – to more sensitive – like ethnic, political and religious identities. When we don’t distinguish between the two, people conflate, increasing the risk of all data being treated (or mistreated) equally. Let’s be clear that when advertisers and marketers talk about data, it’s generally nonsensitive data.

Crucially, it has to be acknowledged that there are bad actors who hack, commit identity theft and misuse data for their gain. Should they be punished? Unequivocally. They belong on the blacklist, under the microscope of law enforcement and regulators. The actions of these criminals cause disproportionate worry and harm to people, but most other organizations use data not to harm people but to serve them.

To reduce conflation, below is a simple lens that can help people understand data and data use.

The Responsible: These brands understand the rules of good data use and are committed to applying them. They use data to understand both current and prospective customers, make better connections and provide better experiences. This includes things like loyalty programs and deals, meaningful marketing and connected user experiences, making people’s everyday lives better. Most of the brands the public is familiar with fall into this category.

The Revolutionary: These are the technology innovators. They’re typically looking to solve customer problems, some previously unknown – and when they get it right, they grow fast! They don’t have bad intentions, but they represent the cutting edge. Many of the benefits people rush to enjoy are actually enabled by data. The public needs to be reminded that the amazing digital maps in the palms of their hands are free because data is used to show us more relevant ads. And we must take care, because some innovation oversteps the mark, due to an imbalance between customer and commercial benefit.

The Repentant: These are brands that have encountered a problem. They may be major brands, but they have made a mistake that left their proverbial data door open to an incident such as hacking. Brands who end up here have a choice. Own up to the mistake, be accountable and put remedies in place immediately or fail by burning customer trust. Respected brands who have slipped do not mean to and can recover, but only through swift and transparent action.

Bottom line, all data is not equal, and if the public misunderstands that, a great deal is at risk. Brands serve people, and people reward them with their attention and money. This is a fair exchange, and data use by responsible organizations is part of what makes the modern world turn, including for marketing and advertising.

Conflation demonizes data and masks the many benefits, such as the largely free internet, with fear. Despite sensationalized claims that every person is being watched, manipulated and monetized, data fuels our economy and powers meaningful connections between people and brands. On its own, data is neutral. But when put in the hands of trusted brands and smart innovators, it has the potential to make life better for all of us.

It’s time to start simple and de-conflate, to encourage people to understand the basics in order to focus attention not on all data, but on that which matters most.