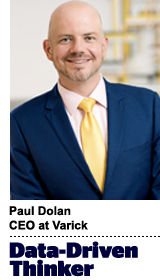 Today’s column is written by Paul Dolan, CEO at Varick.

The rise of the platform economy has disrupted nearly every industry, but perhaps nowhere have the effects been as evident and widespread as they have in reimagining consumer behavior and, ultimately, the field of media planning and buying. Most of today’s product discovery and purchase decisions are in some way influenced by technology platforms such as Google, Facebook and – increasingly – Amazon.

Advertising dollars have followed suit to take advantage of these influential and data-rich platforms. Google and Facebook controlled about 58% of the US digital ad market last year, according to eMarketer, with Amazon at 4.1%. However, eMarketer recently revised its ad revenue forecast for Amazon and now expects it to control 8.8% of the US market in 2019.

This continued shift toward a more-diversified platform media economy has significant implications for brands and agencies, but it represents a particularly important evolution for challenger brands and agencies that are mining new growth opportunities. You no longer need to outspend to outperform bigger competitors.

Our industry’s smaller, nimbler players have generally lagged behind larger competitors on the media capabilities front. In digital, where size has historically translated to power, challengers’ lack of massive budgets and capital to invest in major ad technology systems, centralized in-house trading teams and in-house attribution models has frequently put them at a disadvantage. But today, given the tremendous growth of platform media, these disadvantages are becoming less of an impediment.

Open access to media platforms gives challengers more room to compete than ever. Making smart, strategic buys within platform media doesn’t require complex ad tech stacks and massive budgets. The inherent strengths of challengers are becoming more pronounced, because they can take advantage of tangible growth opportunities that scale well beyond their budgets or in-house capabilities.

Since challengers have avoided getting tied up in legacy, non-transparent pricing models and practices, any brand or agency can now create agile platform strategies that take advantage of the specialization they have honed in areas like social and commerce, not to mention geographic proximity to the audiences they are trying to reach.

Platforms can enhance the degree of technology and digital sophistication of the richly creative and innovative foundations on which these challengers were built.

Here’s how any challenger can maximize their competitive advantage:

A light layer: Challengers don’t need to make huge internal investments in creating proprietary platforms. The platforms offered today by Google, Facebook and Amazon – not to mention players such as The Trade Desk and AppNexus – are much more robust than anything a brand or agency would or could develop for itself. At most, challengers should layer in a light internal system that can handle campaign coordination, reporting and finance.

(Re)embrace creativity: Challengers need to embrace the specialties and advantages that they bring to the table. Each media platform has its own proprietary creative formats, be it a six-second vertical video or a social stories ad. What’s most important is how the story is told.

Smarts are more important than size: Measure what matters. In a platform environment, the size of the budget doesn’t matter anymore. The best ROI is seen by the smartest, most informed buyers. This notion of savvy over size also applies to auctions and attribution. Challengers can leverage any number of attribution platforms to create customized models for their advertising and marketing. The trick is to home in on what matters so that future buys are always getting smarter.

In today’s media buying landscape, platform media has become a massive disruptive force that’s enabling challengers – brands and agencies, whether creative, media, PR or boutique – to take what were once problematic size or budget constraints, or perhaps even self-imposed barriers based on talent, capabilities or expertise, and turn them into competitive advantages.

When challengers deploy technology, creative, data and insights in the right way, they can flex the same level of media muscle as much larger competitors, while also surpassing these Goliaths in terms of nimbleness, creative energy and brand alignment. In the world of platform media, the future belongs to the Davids of our industry.