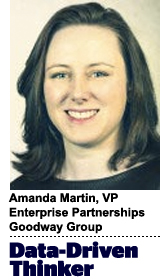 Recently attending an executive-level ad tech dinner, I found myself in an all-too familiar situation: I was the only woman in the room.

While there’s been positive movement getting women to the table, we have to do more. And after my recent experience at the IAB’s Women’s Visionaries event, an annual effort spearheaded by the IAB to do just that, I feel more confident now than ever that we’re heading in the right direction.

The first step is to move the discussion from a reactive stance to a proactive one. Today’s climate gifts us the opportunity to diversify not only the industry, but perhaps even more importantly, the leadership driving our industry forward.

Both male and female leaders alike need to create opportunities for employment or even promotions for women. This can be done simply by being more thoughtful – putting more consideration into how and to whom opportunities are assigned. This way, both female and male colleagues are given equal chances to rise to a challenge. Taken a step further, leaders should encourage individuals to raise their hands for projects they may be hesitant to try, but leaders feel they are ready to tackle. The results may surprise everyone.

In 1995, 37% of computer scientists were women. Today, women only account for 25% of the field, with that number steadily declining. Efforts like Girls Who Code are working to address that decline for future generations, but that doesn’t mean we should wait to find solutions to boost female leadership in the present. Women can progress to participating and even leading technical conversations within their ad tech companies by harboring a commitment to learning and being dangerous enough to break stuff. They should consider requesting training outside their job description, joining the data scientist call, reading the API documentation, learning how to debug an app, gaining a certification in SQL and always asking technical questions to expand their understanding.

Ad tech startups tend to be male-dominated, resulting in an unbalanced culture from the start. If an ad tech startup has yet to hire any women in prominent positions when it has two to five employees, the trend is likely to continue when its staff grows to 10 to 15. This can result in an accidental male-driven company culture, when an even mix can set a business up for success. A recent study found that tech companies founded by men rarely achieve gender parity in their workforces, especially in their leadership. However, among the small number of companies started by women, a balanced workforce is the norm.

Smart women in ad tech know other smart women in ad tech. If ad tech companies are struggling to recruit talented women, they should turn to current female employees and incentivize them with referral programs. If a company’s culture supports female employees, they’ll be more than willing to recruit on its behalf. While setting up a referral-incentive program can be key, supporting a culture where women want to recruit other women is the foundation. Do companies know how their female colleagues feel about the company culture? Their feedback could be vital in creating an agreeable work environment beneficial for the future.

In addition to these efforts, successful male and female ad tech leaders should mentor younger talent, ensuring a balanced mix of mentees. The ad tech industry is fairly young, making its leadership young as well. We often fail to purposefully seek out mentors, but if leaders can identify the potential that others have yet to realize themselves, we can start to empower future ad tech leaders. And since ad tech suffers from a turnover problem, mentoring could also go a long way to inspiring workers to stay at their jobs longer.

Aside from the responsibility of women to speak up and be proactive, male colleagues also need to support diversity. Working together, we can equip the ad tech industry to capitalize on the opportunities created by diverse workforces and leadership.