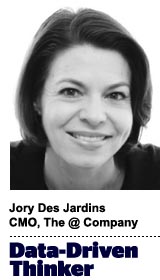 Today’s column is written by Jory Des Jardins, CMO of The @ Company and co-founder of BlogHer.

Nearly 10 years ago I heard about programmatic ad fraud for the first time. I had co-founded a media startup that ran advertising across several thousand personal websites and had heard rumblings of questionable practices on other networks, such as wallpapering ads in the less-viewed footers of sites to capture more ad revenue, and deploying bots programmed to click on ads or even clone human user traffic.

At the time I was sitting on the board of the Internet Advertising Bureau, and the hand-wringing was significant. We needed to develop technical standards to protect our websites – and by extension, our industry – from the scourge of bot traffic. Admittedly I wasn’t particularly technical. I leaned on our ad operations leader to tell me if we were in any immediate danger of ad fraud, which researchers estimated accounted for 20% of all online traffic. And I leaned on more technical partners to do the work of keeping my network bot free.

This was when I became a proponent of Amazon Publishing Services (APS), a miraculous service that, unlike other programmatic partners and DSPs, could weed out impressions by actual people who had demonstrated interest in products, as determined by their online shopping patterns on Amazon-tracked sites, and whose traffic generated a “premium” ad rate.

It seemed to me that relying on big tech to qualify web traffic was the ultimate solution for digital media companies that weren’t Google, Facebook, or Amazon: We could leverage big tech’s innovation and expertise to guarantee our traffic was human. We would always have inventory because we were part of a much bigger audience pool that attracted the biggest advertisers. We could stay a media (vs. technology) company and focus on what we knew best: great programming and influencer marketing strategy.


In the years that followed, that vision dissolved, as my role shifted away from content and more toward media day trading and optimizing the revolving door of ad tech partners against my inventory. Our extensive roster of premium publishers was almost beside the point; premium content was no longer determined by the publisher quality but by the browsing data of readers. I’d never see a CPM over $10 ever again.

In the years that followed I veered away from content as a business and ironically toward emerging tech, even spending a stint at Amazon’s cloud services business unit, AWS. Even though I was no longer engaging in ad tech, I learned how Amazon approaches business-building, from ads to commerce to cloud services.

Amazon works as a flywheel, getting more and more powerful by offering small businesses access to its enormous network of customers, partners and data insights. This business model has put Amazon in the crosshairs of the European Union which brought antitrust charges against the tech behemoth earlier this month, saying, according to The New York Times, “the online retail giant broke competition laws by unfairly using its size and access to data to harm smaller merchants that rely on the company to reach customers.”

The implication is that while initially the services enable small businesses, these companies pay a data tax for being too successful. It’s a data fiefdom of sorts, where the primary landlord – in this case, Amazon – ensures the business owners it enables never compete with it or leave it without giving up global discoverability.

Recently, I’ve thought a lot about how people and small businesses can break our harmful addiction to companies for which our data has become their product. It has become a best practice enabled by big tech to always seek as much data as possible before making business decisions. It seemed almost sacrilegious when we disabled Google Analytics, which used our visitor data to inform Google’s legendary ads business, and used such blunt instruments as sales data and customer feedback to help define our marketing strategy.

But at least these forms of data are not thinly disguised surveillance, nor will they be used against us at a time when we are big enough to be on the radar of a Google, Amazon, Apple or Facebook.

For all their overreaching, big tech hasn’t outgrown its usefulness. There are still plenty of advertisers, platform builders, and small businesses that are thriving using services such as Google Analytics, Facebook Audience Network, the Apple Store and Amazon Publisher Services.

But perhaps the EU’s latest antitrust suit, and President-elect Biden’s plan to increase the scrutiny on Big Tech’s use of data, are reminders to startups and small businesses everywhere that there is a price to be paid for over-reliance on big tech as our growth saviors. At some point, we must bring our digital destinies back into our own hands.