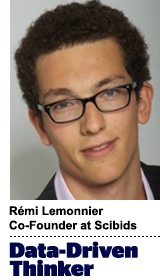 Today’s column is written by Rémi Lemonnier, co-founder at Scibids.

Intelligence, success and even survival are often determined by one’s ability to adapt to change.

The current crises caused by the COVID-19 pandemic and protests after the death of George Floyd provide a crash test for many businesses, especially in the advertising industry, which is historically tied to consumption and economic growth.

At the onset of the pandemic, there were predictable cuts in media budgets and campaigns, due to the uncertainty about the future economic climate. This decrease in the demand for publisher’s ad inventories, coupled with an increase in the supply due to more internet activity, translated into lower CPMs.

The market dynamics imply that smart media buyers whose businesses are only moderately impacted by the crisis should continue advertising because they could get the lowest CPA if they know how to adapt. There are several efficiency gains that can be utilized from an optimization point of view.

Weighing every cost and the equation of efficient media buying

As a component of a media investment, the global decline of CPMs in open market inventories should lead to a reevaluation of other components’ prices relative to their added value in the expected outcome.

The best way to do so is to remember that every penny invested must be weighted relative to its incremental value in the final outcome. Optimal performance is reached when a campaign bids on every impression according to the equation of efficient media buying:

This means in particular that budgets on line items relying on data should be reevaluated. Fixed data costs become too expensive relative to the low cost of media, and more often than not, they are not worth the investment. In a given media investment, if the CPM has been cut in half while the data costs have remained the same, media buyers who still buy this data are losing cost-saving opportunities.

In terms of ad-serving fees, advertisers are rightly concerned about the possibility of a campaign exploding its ad serving costs because it serves too many impressions. However, imposing high minimum CPMs to campaigns is probably the single best way to deteriorate performance when CPMs are low but highly volatile. Media buyers should implement ad-serving fees in their buying platform and let their optimization algorithm take this information as an input.

Most deals have floors that have not been reduced, but these majority should be used less since they are way too expensive relative to what media buyers can get in an open auction.

Crises can also have their bright side, as they are an opportunity to change old habits and move forward.

One habit buyers should abandon – if they haven’t already – is to continue to act as if we were still in a second-price auction world. Bidding too high on low-competition inventory and paying the first price is already bad, but when CPMs are so abnormally low, it becomes critical to avoid overbidding. Media buyers should bid much lower on first-price auction inventories and implement bid shading.

Buyers should also not rely on last year’s performance whitelists. With recent changes in consumer behavior, media buyers should really question the precision of performance analyses that ran before the pandemic. It is the perfect time to widen the targeting of an always-on campaign whose inventory targeting has been reduced by successive optimizations.

Staying ahead of the curve

The general acceptance of remote working and the adoption of associated tools shouldn’t be the only investment in tech adopted by media buyers right now.

Media buyers should challenge and enhance their ad stacks, beginning by activating impression-level data feeds. These campaign logs are generally underexploited but constitute a gold mine for savvy media buyers. One possible application is building a bid shading procedure to help advertisers determine how much they should bid, given what they estimate to be the impression’s true value. In a first-price auction, knowing that a given impression is worth $1 according to the campaign objectives is not sufficient; one must also determine if bidding $0.20 would be enough to win it or if the bid should be as high as $0.99 to have a chance.

All platforms provide native APIs, which will become a keystone to implementing best practices at scale and streamlining these changes. This is probably a good moment to revive dusty projects of templatizing campaign creation around three mantras:
• Reach: Include an exploration tactic and run the campaign with all ad formats.
• Granularity: Automate the creation of one tactic for each prebuilt inventory segment.
• Safety: Ensure that the setup will prevent the campaign from overspending or spending everything in one day (no “flight ASAP” setup at the IO level, for instance).

If 2020 has taught us anything, it’s that market conditions can change on a dime. Marketers who can most effectively adapt their strategies are the best positioned to survive and thrive in the current – or any – crisis.