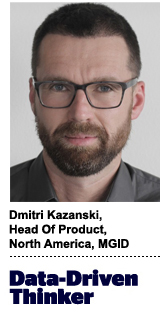 Today’s column is written by Dmitri Kazanski, head of product for North America at MGID.

Last click is the most commonly used attribution. Why? Because it’s very simple – but it’s also clearly flawed.

The next time you need car insurance, more likely than not, you’ll type “Geico” into your browser, after which you might click the first link you see: an AdWords link. The insurance quote you’re given will be counted as a lead by Geico, but here’s an important question: Does the ad you clicked deserve full credit for the lead?

In principle, the idea behind data-driven attribution sounds great. The example given by Google appears to indicate a model that correlates conversions to certain events, such as clicks on particular ads. The credit is then spread across the events that correlate the most with the conversions.

Unfortunately, not much is known about how the model is built or how exactly it works. It’s a black box that might be powered by a regression or a neural net, among other things – who knows.

As someone who works with predictive modeling, I wonder if Google’s “data-driven attribution” model accounts for context and interactions.

Secondly, the new default attribution model does not appear to explain how ad views that do not result in clicks count toward the attribution, if at all.

In practice, this attribution study will be challenging to implement. Usually, it involves resolving the identities of both converted users and exposed users. Doing so presents obvious privacy-related challenges. Clearly, Google cannot do this type of study for every campaign, but at least such studies appear to be used for calibration.

Still, it is a step in the right direction.