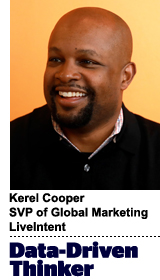 Today’s column is written by Kerel Cooper, SVP of global marketing at LiveIntent.

Technology, obviously, has its barriers. It takes skill, patience, resolve and education to really compete and innovate in our complicated field.

For so long, it felt like the only companies that could really wield boundary-pushing technology in digital advertising were the tech platforms that specialized in hiring, acquiring and managing for it. It took resources and know-how, and no one had more of both than the triopoly of Google, Facebook and Amazon.

However, the barriers for dexterity in technology have declined over the years. What once required a background in data science or data analysis is now mitigated by platforms that employ user-friendly UX, essentially democratizing the ability to wield technologies. As a result, AI can be leveraged by nearly everyone, and brands and publishers are now exploring doing things on their own that used to be solely in the domain of the tech platforms. This was a trend that began to gain steam in 2019, and it will accelerate in 2020.

Nike’s acquisition of Celect is Exhibit A. At first glance, you may not be blown away by this acquisition. Ho-hum, a major brand made an investment in being able to personalize previously anonymous traffic to its site. But what’s impressive is that Nike would previously trust other partners to provide some level of personalization.

The lowering of the barrier to entry for technological dexterity meant that Nike, which didn’t grow up as a technology company, was now able to act like one. It acquired a technology that allowed it to truly make use of the troves of first-party data it has accumulated through goodwill, loyalty and a great product, instead of handing that bounty to platforms, specifically Amazon’s walled garden. The acquisition will help Nike with its move to partially sever its relationship with Amazon in favor of raising the level of consumer experience via more direct relationships.

Brands and publishers often follow each other’s advancements. Brands famously mimicked publishers by investing in editorial talent to make their own content compelling, and publishers have begun to think like brands by diversifying revenue streams and selling products outside their traditional core areas of expertise.

The northern light here, as with so many publisher advancements, is The Washington Post. The Washington Post launched Zeus in September as a way of bringing control back to the publishers for ad buying. It is clearly trying to disintermediate the interlopers that stand in between it and its customers when it comes to earning revenue.

Nike and The Washington Post aren’t alone. Hearst and the Financial Times are also exploring their own self-serve ad platforms to better compete against Facebook. McDonald’s and Walmart have also made moves to own more of their technology stacks with their acquisitions of Dynamic Yield and Polymorph Labs, respectively. And hot off the presses is the news of Sam’s Club acquiring Triad, bringing in house the functions that would have, until very recently, been the domain of a vendor.

This below-the-radar trend is likely to explode in the coming years. Brands and publishers know that to control their own destiny, they need to position themselves to operate as independently as possible.

That was once unthinkable, even for giants like Nike and The Washington Post. In these early days, it’s just a few brands and publishers making concerted efforts to own their solutions, but I predict that soon, more entities will embrace investing in their deployment.