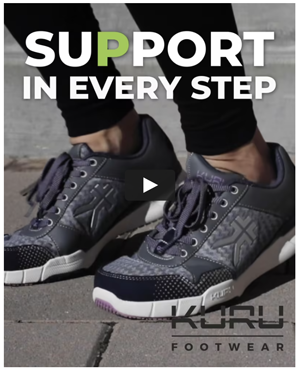 But good video creative is expensive to produce, difficult to test and the impact on down-funnel performance is often tricky to measure.

Between the end of 2018 and into 2019, KURU Footwear, a direct-to-consumer brand focused on eliminating foot pain, invested heavily in a series of videos in an attempt to inject some humor into its brand.

It’s long been a trend for DTC brands to adopt a funny, tongue-in-cheek approach to their video advertising. Just look at Dollar Shave Club, Purple, Poo-Pourri and Manscaped.

KURU Footwear worked with a creative agency to develop videos centered on the character of Achilles explaining the brand’s value, promise, what its product delivers and how.

Here’s a taste: “Did you know before the phrase Achilles Heel it was actually Achilles pecs? [Cue closeup of the shirtless actor playing Achilles flexing his pecs] Hello, I am Achilles, primarily known for being extraordinarily sexy and for my tragically painful feet.”

KURU Footwear spent a chunk of money to promote the videos in Q1 2019, and yet performance started to dwindle. The videos, and KURU Footwear’s video strategy, got sidelined in favor of other better-performing channels.

“Video is a great medium to educate and YouTube can be an incredible place to experiment,” said Sean McGinnis, KURU Footwear’s CMO. “But a lot of our experiments were failures, because we weren’t measuring, we were just throwing money into the top of the funnel and hoping that it would pay dividends down at the bottom.”

Last year, KURU Footwear decided that it wanted to take another stab at squeezing performance out of existing creative assets and expressed that desire to its account team at Google, which put it in touch with creative analytics platform VidMob.

KURU Footwear implemented VidMob’s creative intelligence tool, which uses a combination of AI and computer vision to analyze the creative variables in a video ad frame by frame overlaid with actual performance data to isolate and understand why a piece of creative is performing or not.

After a round of A/B testing, KURU Footwear found that lifestyle footage of people actually wearing its shoes and doing everyday things like running in the park – alongside direct response calls-to-action, like “Shop now” – worked best.

The new creative had a 15% higher return on ad spend and a 15% lower cost per purchase than KURU Footwear’s other video assets.

“Video has been a small part of the overall plan for us, but now it’ll be a much bigger focus,” McGinnis said. 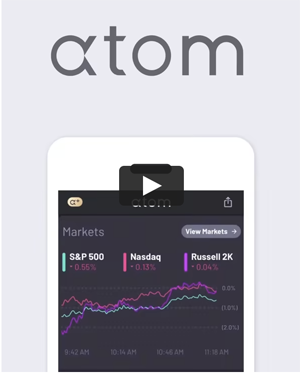 Video is also a priority for Atom Finance, an investment research app for independent investors that launched in 2019.

The fintech space is extremely crowded, said Trang Dao, Atom Finance’s VP of growth, which is why it’s imperative to stand out and clearly explain what differentiates one service from another, and video is the go-to vehicle.

“When you’re a DTC brand, you can’t get away with not using video if you want to distinguish yourself in the consumer space,” she said. “But because we’re a startup, our resources are incredibly limited.”

At the same time, creative testing capabilities from Facebook and Google App Campaigns are fairly limited and not very scalable. Often advertisers will simply turn the task of creative testing over to a platform, using its algorithm to decide what performs.

But Dao wanted to be more analytical, and her Facebook rep suggested VidMob.

Atom Finance had a batch of new video creative it had commissioned through an agency.

“There were so many things about it I wanted to test, but I was dreading having to set up a five-month testing period and manually having to isolate one variable at a time,” Dao said.

For example, Dao suspected that some people were downloading the Atom Finance app without fully understanding exactly what it is and how it’s different from, say, a commission-free brokerage app like Robinhood.

Atom used VidMob to figure out which specific aspects of its videos could be tweaked in order to make its raison d’etre clearer and increase in-app engagement. Atom realized, for example, that the app visuals it was showing were too complicated and too focused on product features rather than the value proposition.

The modified videos generated a nearly 30% lift in app engagement after signup, and so Atom started using the same insights to inform other aspects of its marketing strategy. But Atom is also going to keep on testing and trying new things, Dao said.

“It’s always important to heed the best practices,” she said. “But then, as soon as you can, you have to make sure to test and measure them against the objectives you’re trying to optimize for to see what works best for you – and then keep on doing it.”