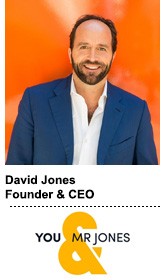 After a three-year stint as Havas CEO, David Jones realized the agency model needed more than a revamp.

It needed a complete restart.

“It got to a point where it would be far easier to build a technology company that does marketing than to try to change a big legacy business into that,” he said.

So, Jones set out to do just that, launching You & Mr Jones in 2015 as a “brand tech” group – an investor and broker of relationships between tech platforms, digital production businesses and brands. The group’s investments range from ad tech companies like Beeswax, Jivox and Amino Payments to consumer platforms like Pinterest.

You & Mr Jones grew 50% organically in Q1 and has raised $350 million so far, which it will invest in more tech-enabled business. The group will “deliberately not ever buy ad or media agencies or anything that isn’t tech-enabled,” Jones said.

“Ad agencies are great at the brand and advertising piece, but they don’t get technology, nor do they really want to,” he said. “It’s not good for the future of their businesses.”

AdExchanger: What is brand tech?

It’s a belief that you can do marketing better, faster and cheaper using technology. It’s a very obvious idea, but most people who get brand or technology are only in one city or one vertical, so they can’t deliver for global brands.

What’s disruptive about the way you work with brands?

We sit between brands and tech companies. We invest like a fund, but we’re not a fund. We have tens of thousands of creatives. One of the biggest challenges brands face is creating content at scale, at speed, for a variety of channels, at a cost they can afford. Tapping into creative talent allows us deliver better, faster and cheaper.

We also have a consultancy that works with brands to [do things like] launch a new product using no traditional media. They’re working with a luxury brand to drive sales using tech in duty-free around the world. We’re working on three different DTC plays at the moment. One is for a big global company launching a new division. Another is for a  startup and the third [is for a] celebrity.

Your creative network sounds similar to MediaMonks, which Martin Sorrell just acquired for $300 million. What do you make of his new venture?

He’s not saying anything too dissimilar to what we’ve said: If you’re going to do this from scratch, you need to build it with technology at its core.

Him leaving WPP is the final nail in the holding company coffin. The guy who used to run the biggest company in the old industry has said that the industry is beyond challenged. We agree with the thesis he’s building his business on. And I’m sure he’ll do well.

As an ex-CEO, what’s your prediction for agency holding companies?

None of them are going away tomorrow. As private businesses, they still make a lot of sense. The problem is, they’re not growing anymore.

What’s your investment strategy when it comes to ad tech?

When it comes to media, we’re looking to use technology in a new way. It’s a lot of AR and AI. Beeswax is building programmatic [capabilities]. What they’re doing allows brands to take programmatic in-house. Companies like Amino are using blockchain to help brands save money and trace who gets what. These are disrupting the media buying industry.

It sits in a different place in the funnel. It’s also a signal of what people are going to do. Something like 55% of people shop off of Pinterest. Other social media platforms, besides Google, are 10% and below.