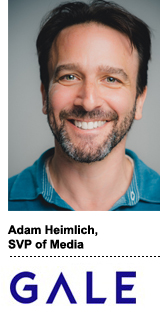 Adam Heimlich, the newly minted SVP of media at MDC digital agency GALE Partners, enjoys telling it like it is.

“Traditional agencies blew it in digital and there’s a big market gap there – a lot of money at stake,” said Heimlich, who left Horizon Media in June after nearly five years at the agency, where he was the driving force behind its programmatic media arm, HX.

Heimlich was attracted to GALE, which was founded in 2014 as a provider of consulting and strategic services, because it's comfortable allowing audience and addressability to lead the way, Heimlich said. Traditional agencies continue to balk at change.

But GALE isn’t the only agency vying for a piece of the pie left on the table by the legacy guys – consultancies are pulling up a chair, too. Heimlich isn’t worried about the invading army of suits and ties, though.

“No one pays us $1 million for a deck – and that’s not really the right approach for advertisers dealing with failing digital media agencies anyway,” he said. “The story of 2017/2018 has been TV agencies falling down on digital strategy, and that’s created a big opening in the marketplace.”

AdExchanger caught up with Heimlich two months into the job.

AdExchanger: What attracted you to GALE?

ADAM HEIMLICH: GALE has a position on targeting and addressability that hits a spot the TV agencies are missing. We’re saying that the ability to be addressable in media brings a real opportunity for advertisers to think of audience management as a function that lives within their walls and is tied to business goals, strategy, creative, product strategy and media. Think of it as a hub and spoke with audience management in the center.

I’ve been trying to bring that to the TV agency world for many years, to bring the advantages of audience targeting to media organizations, but media organizations and traditional agencies are resistant to this idea, because it changes so much of what they do. And there’s been friction there – it’s so advantageous for the client and so difficult for the agency.

SVP of media is a new role at GALE. Why was it created?

GALE has been focused on audience management, addressability, CRM. They devised a lot of loyalty programs, and they have the capabilities of a management consultancy. They can go deep into a company and its P&L to see exactly which audiences to go after.

All of this work naturally leads to activation. Clients started saying, “You know, this should really play into media, too – can you help us buy media using the same strategy?” There was already activation at GALE, but they didn’t have anyone at the SVP level. Brad [Simms, GALE’s president and CEO] actually first found me through the pages of AdExchanger.

What type of clients are ready to roll up their sleeves on an audience-led strategy?

It’s the companies that want to own pieces of the strategy, that feel like the media agency hasn’t served them. Companies that want their hands on the steering wheel in terms of audience targeting and data – that’s our sweet spot.

Or clients that are looking to cut waste. Digital is experienced by many advertisers as a succession of channels they have to be in, whether that’s search or social or programmatic, and that’s caused a lot of waste in the budget. The channel strategy should be an output of the audience strategy. When you do that, it ends up saving you a lot of money.

How big of a problem is waste in the ad tech ecosystem?

We’re seeing an enormous amount of waste. We’re seeing media decisions that are not justified by data, even when data is readily available. We’re also seeing the traditional media process of making media investments based on a pitch applied to digital – and that just isn’t the right process for digital.

Data should drive the process of investments, and yet, we’re still seeing tens of millions of dollars decided on the basis of a pitch, and often by someone with only four or five years of experience.

What are you working on right now that’s really exciting?

We’re active in politics and working campaigns leading up to the midterms. Media has often been very process-driven or sales-driven or tech-driven. At GALE, the focus is on influence. To help advertisers influence an audience is interesting, but to realize that power in the political sphere is even more interesting. Tech and data have brought an awesome power to the world, and we’re committed to using it responsibly.