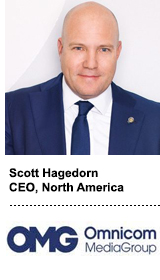 That is the question holding companies have wrestled with since the advent of programmatic buying a decade ago. While Publicis Media and GroupM have broken up or reassembled their trading desks, others like IPG have kept that expertise at the center.

Most of this talent was already working on client accounts at the agencies and will continue to do so closer to the rest of the team, said Scott Hagedorn, CEO of Omnicom Media Group North America.

“The [agency] brands need closer integration of these services as they have become mainstream,” he said. “It’s time for them to migrate directly into the brands.”

Annalect will continue to live on as a central group, with roughly 150 people globally that focus on product development, engineering and data science and procurement for Omni, the planning and activation platform Omnicom launched in July 2018.

Resolution will remain a standalone agency with about 80 people in the United States specializing in performance clients. But its enterprise partnership team, which negotiates deals and engineering projects with the major platforms, will report directly to Hagedorn.

Putting Annalect and Resolution talent into the agencies will hopefully facilitate a two-way conversation around product development for specific client needs. Hagedorn envisions building vertical-specific versions of Omni as well as new tools around “fringe” capabilities, like buying within the Amazon ecosystem and advanced TV.

“We want Omni for automotive, Omni for pharma,” he said. “That’s going to require a lot of dialogue between the folks developing stuff in the middle and the brands themselves.”

Moving technical talent into the agencies will also streamline client access to the group. Previously, clients often had to set up a separate meeting with an Annalect or Resolution expert to answer a technical question, like understanding the difference between the Adobe and Oracle stack, or whether Apple’s ITP initiative is causing data outages.

“Those are significant questions that a client needs an answer to now, not in two weeks,” Hagedorn said.

“Two or three years ago, I didn’t see what holding company clout would look like in an auction-based world,” he said. “We’ve built the connective tissue where we’ll negotiate for digital inventory, but then we decision on the inventory based on the audience later.”

But moving people into new organizations can be tough on talent. Omnicom will have to ensure former Annalect and Resolution employees feel connected to their colleagues, and ensure other agency talent isn’t overshadowed by their new tech-savvy team members.

“We’ve been erring on the side of over-communication for the past month or so,” Hagedorn said. “It’s not that we thought people at the [agency] brands weren’t technically literate. It’s that there’s not enough of them, and now they’ll have an army.”