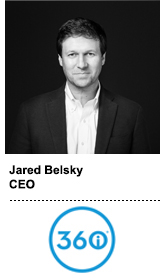 Belsky was promoted to the new role after former 360i chairman Bryan Wiener left the agency to become CEO of measurement firm comScore on Monday. Sarah Hoffstetter, 360i’s previous CEO, is now chairman of the agency.

“This was [a] very well-planned succession,” Belsky said. “It’s sort of a natural progression and increase of responsibilities.”

In his new role, Belsky will be responsible for the overall strategy, operations and vision for the agency to be a full-service digital shop. Previously as president, Belsky oversaw media, product development, programmatic, analytics, mar tech and innovation.

“An agency that looks, for example, at programmatic through a creative, media and strategy lens truly benefits the client,” he said. “Some other agencies separate that all out, and you lose the consumer focus and the bigger picture.”

360i, originally a search specialty agency, has been building full-service capabilities since 2011. As clients look for increasingly integrated services, they’re hiring the firm as their agency of record, Belsky said.

“We’re starting to be seen in the market as a new, modern option for progressive marketers who want to help move their brands forward,” he said.

But maintaining its expertise in social, creative, UX, programmatic or analytics is crucial to execute well for clients, Belsky said. It also helps 360i stand out during a busy RFP season.

“Progressive CMOs are not thinking just about scale,” he said. “They’re looking for an agency that thinks in terms of creative, media and analytics. They have to have disruptive, breakthrough communications thinking.”

In his new role, Belsky will continue working closely with Hofstetter, who will advise clients and support the executive team. And while he hopes to grow the agency under his purview, the focus isn’t on being the biggest agency or being all things to all clients.

“Some agencies that are too generalized don’t do anything really well,” Belsky said. “Our objective is defined growth in terms of quality, not just size.”