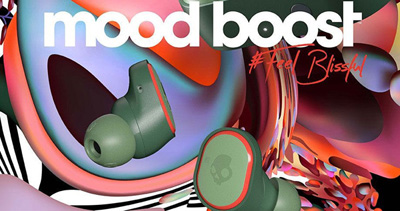 Direct-to-consumer sales at Skullcandy are up more than 100% year over year.

That doesn’t mean the audio, headphone and earbud company isn’t feeling the effect of the coronavirus situation like most everyone else. “Of course we are, “ said CMO Jessica Klodnicki.

But the uptick validates Skullcandy’s long-term strategy to diversify its sales channels. It also benefits because its products make sense in a stay-at-home world.

While January and February were actually soft, March and April drove the sales uptick.

“The advertising we’re doing is also absolutely helping the business through this rough patch,” Klodnicki said.

In April, Skullcandy launched its Mood Boost campaign to highlight a different positive mood each month – blissful, confident, original, hopeful, strong, determined – alongside video content featuring rising music stars and limited-edition product and art bundle drops. The first drop is already sold out. A portion of the proceeds from every product sold is being donated to a mental health nonprofit called To Write Love On Her Arms.

“We tuned our copy to acknowledge the current state and to be sensitive to what is going on, but we’re also a little cheeky about it,” Klodnicki said. “If you get served an ad from us right now it might say something like: ‘Block out the noise … and maybe the news,’ ‘More music, less mom on board’ or ‘Prevent stir crazy.’” 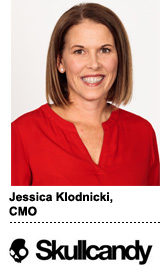 JESSICA KLODNICKI: We’re a youthful brand – there’s a skull in our logo – our target consumers are between 16 and 34-ish, so our mix is almost entirely digital and social, and that hasn’t changed in the current environment.

We’re kind of the scrappy underdog in the space, and so our size and position shapes how we invest. Most of our ad dollars are on Facebook, Instagram and in the Google ecosystem, both search and Google Shopping. We’re not on TV and we don’t do out-of-home. We’re actually doubling down and spending a little more in the digital space than we were before, though.

How do you justify increasing spend in this economic environment?

How do you know?

We’ve become a wildly metrics-driven company, and we see that we’re crushing our ROAS goals. We’re fortunate to have a product that resonates right now, that’s useful to people sitting at home working or studying or trapped with their roommates. They need to block out the noise.

What does it mean to be wildly metrics-driven?

We didn’t start out that way. It’s been part of a big evolution. Now, if we want to do something like branded content, we have to prove a connection back to sales. Marketing gets accused of being fluffy and sometimes disconnected from the metrics, but I’ve been trained to operate with a more general management mindset.

You have to constantly defend the spend. We work with a partner called Hookit, for example, to measure everything we’re doing in social media. They track our social media accounts so we can compare engagement across platforms on an apples-to-apples basis.

We also measure ourselves against the big brands. Although we have fewer followers, we have better engagement. Follower count is a passive metric, engagement is active. Our average interactions, for example, are double and even triple some of our much larger competitors.

How do you apply ROAS metrics to your content?

We’re still heavily dependent on Amazon and on brick and mortar distribution through places like Best Buy, Target and Walmart. But in the spirit of controlling our own destiny, we’ve been working to fine tune our direct-to-consumer business and our own website. About two years ago, we launched something that internally we called our content-to-commerce programming, which was a series of livestreamed concerts. We pulled in a lot of eyeballs and were then able to retarget people with more traditional product advertising.

We continue to refine that formula. We can’t afford to do content for its own sake. We have a ROAS threshold, and as long as we’re hitting it, our CFO and CEO are happy. If we exceed ROAS, we get to invest more.

Do you work with agencies?

We were, on and off, to help with content development and execution. But we started our own in-house creative agency about two years ago and we also brought in all of our media buying.

Having the creative team in house really saved our bacon in the current environment. I’m on the phone with our creative director on a daily basis talking about changes we need to make or where we need to pivot our messaging. That kind of stuff is super challenging to do quickly with a third party.

Ad agencies don’t want to hear that, but it’s true.

What’s the big idea behind the new Mood Boost campaign that launched in April?

It’s about connecting the dots between music and emotion, and it’s an evolution of a campaign we ran last year, called 12 Moods, where we featured a new emerging artist every month with content tied to it and a limited edition product drop. We sold out every month for 12 months.

But for the new campaign, we created much shorter content designed to be interesting even with the sound off. Eighty-five of people scroll on Facebook and Instagram with the sound off. Imagine our horror hearing that as an audio brand. But that insight inspired us to also work with visual artists for this campaign.