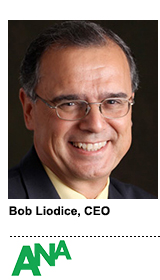 The Association of National Advertisers (ANA) recently commissioned a new programmatic study to identify where brands are wasting money and make recommendations that will bring more clarity and efficiency to this market. (Read the RFP.)

In the most recent episode of AdExchanger Talks, CEO Bob Liodice talks about why the ANA is taking this on.

Liodice describes the purpose of its study this way: “To make the components of this programmatic supply chain way more transparent and way more open.”

Notably, the ANA’s study will include large walled gardens in its definition of programmatic. Big advertisers that get riled up about the “ad tech tax” tend to focus their public complaints on the “open web” ecosystem, which includes hundreds of independent publishers, marketing tech vendors and agencies. Meanwhile, Google, Facebook and Amazon have often been treated with kid gloves – portrayed as key partners rather than margin-taking intermediaries.

The ANA itself has perpetuated this gentle treatment in its own rhetoric about the programmatic supply chain. For instance, its explosive 2016 report on programmatic transparency focused almost entirely on agency rebate practices, but didn’t extensively spell out that a good chunk of the payments and discounts in question came from the largest consumer media platforms.

Liodice argues that there is precedent for demanding more accountability from the walled gardens. He notes the ANA previously challenged Facebook, YouTube and Twitter on the issue of brand safety through its involvement with the Global Alliance for Responsible Media.

“Perhaps we can enter into the same type of meaningful dialogue with the platforms that we just did on the brand safety issues,” he says. “If we’re all working with better knowledge, isn’t that going to be good for everyone?”

Importantly, Liodice says the study’s goal is not only to serve the industry’s large ad buyers – the Dunkin Brands and Diageos of the world ­– but also the hundreds of less-resourced advertisers that fill out its member base.

“Our job as a trade association is essentially to wade through the levels of opacity that may be out there and to shine a light to make that total industry knowledge as common to the small guys as to the goliaths,” he says.