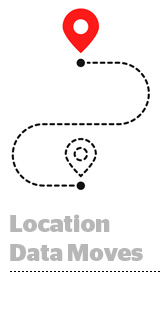 LiveRamp is distancing itself from location data.

AdExchanger has learned that in Q4 2019, the onboarder offloaded the location data-related portion of the business it got along with its 2016 acquisition of Arbor. Cuebiq, a location-intelligence company, bought the assets.

LiveRamp is keeping the rest of the Arbor business, which includes technology to connect first-party web and app data with unique hashed identifiers.

Both Cuebiq and LiveRamp confirmed the transaction.

The location data business has been getting a little hairy from a privacy perspective.

Geolocation data is covered under the California Consumer Privacy Act and under the General Data Protection Regulation in Europe; smartphone-derived location data is the target of scathing news reports; and new iOS features are coming out that aim to cut down on location tracking.

LiveRamp acquired Arbor, a marketplace for first-party publisher and app data, in November 2016, the same day it announced its intention to acquire Circulate, a startup that helps app developers monetize their user data. It spent $140 million to buy both companies.

Antonio Tomarchio, Cuebiq’s CEO, declined to comment on either the size of the transaction or the size of the location business it acquired from LiveRamp. But a source with knowledge of the deal told AdExchanger that Cuebiq paid somewhere in the neighborhood of $200,000, and that Arbor’s location-data business was worth less than $1 million a year to LiveRamp.

According to LiveRamp CEO Scott Howe, the divestiture was in line with LiveRamp’s wider strategy following the close of Acxiom’s sale to IPG in October 2018.

“We sold off our data manufacturing business and focused our strategy on operating a neutral and open marketplace to connect high-quality, ethically-sourced data sources with data buyers,” Howe said.

The sale of Arbor’s location data-related contracts to Cuebiq, which Howe called “a very insignificant legacy data business,” is in line with that strategy.

LiveRamp positions itself as a neutral and agnostic party that facilitates identity resolution but doesn’t actually own any data assets.

By the same token, it doesn’t make sense for LiveRamp to expose itself from a privacy perspective for an asset that brings in such a small amount of revenue and isn’t core to the business.

“The rationale is to expand and strengthen our partnership with LiveRamp on … media agnostic offline measurement,” Tomarchio said.

Demand-side clients of Arbor’s location business became Cuebiq clients as part of the deal, and Cuebiq subsequently terminated any supply-side app partnerships that were in place since it already has direct app relationships through its own software development kit integrations.