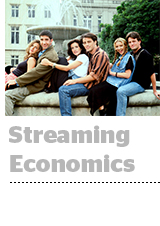 Netflix will be there for you – but it won’t come cheap. The streaming service will pay around $100 million to AT&T’s WarnerMedia in order to retain rights to reruns of the TV show “Friends” in 2019, reports The New York Times. That’s more than three times Netflix’s current licensing deal for the sitcom – but this one is bigger than even that nine-digit price indicates. The agreement underscores how much more advanced Netflix is in the SVOD market than legacy media companies transitioning to streaming. WarnerMedia plans to launch its own streaming subscription offering next year and it will probably start keeping some of its most popular offerings off of other services soon. There aren’t many shows that act as subscription tentpoles, but they do exist. Consider how HBO made the season premiere of “Game of Thrones” free for everyone to entice potential subscribers. But WarnerMedia’s $100 million cash injection is easier to quantify than a possible subscription boost or the added stickiness that can come with exclusively streaming premium content. And Netflix – probably better than any other business – knows how much the right content can impact subscription dynamics. More.

We Interrupt This Pause

Hulu will begin selling aptly named “pause ads” next year, which will run while a user pauses a show, Variety reports. The idea is that consumers will accept ads that don’t interrupt their viewing, but instead play when they’re taking a break. AT&T’s Xandr is testing a similar experience under the premise that SVOD services can’t support all of their content without additional ad revenue, according to CEO Brian Lesser. It’s also not much different than buying linear TV commercials, which in reality are commonly tuned out or consumed in the background. The ad breaks could also be better tailored by data-driven platforms. Many people, for instance, commonly pause shows while they’re cooking, which opens up interesting targeting opportunities. “You do not want to deliver a longform advertisement in this situation,” Jeremy Helfand, Hulu’s head of advertising platforms, told Variety. “I think you have seconds to deliver your message effectively.” More.

In the past five years, venture capitalists have funded hundreds of millions of dollars in Facebook advertising in the form of direct-to-consumer startup customer acquisition costs. Some of those businesses have matured or had successful exits, but CPAs are trending up and optimization is increasingly “like squeezing blood from a stone,” writes Charlie O’Donnell, founder of the VC firm Brooklyn Bridge Ventures. The DTC category isn’t going to implode, but startups with 90% or more of their marketing and customer journeys tied to Facebook should be considering new channels. Facebook has already diminished ad targeting capabilities to tighten user privacy. And if not for the growth of Instagram and WhatsApp, Facebook would also be dealing with tough questions about its core user engagement slowdown. Check out the blog post.