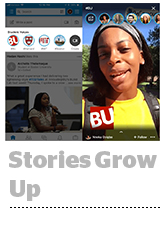 LinkedIn is the latest platform to join in on the Stories craze. The professional networking site is launching Student Voices, a video-only stories product for US college students that it plans to expand into a broader product for all of its users, TechCrunch reports. LinkedIn is trying to cash in on the trend of young people obsessively posting videos by framing it as a way to share professional experiences. “Having these videos live on their profile can help students grow their network, prepare for life after graduation and help potential employers learn more about them,” says LinkedIn product manager Isha Patel. But it remains to be seen if a professional networking site is the right place for Stories, which users generally associate with unpolished, off-the-cuff content they don’t necessarily want connected to their resumes. More.

Amazon updated its terms of service for Fire TV, the ecom giant’s connected TV device, and now requires broadcast OTT apps to hand over 30% of their overall ad impressions to Amazon to sell itself, Ad Age reports. There’s precedent for a 30% take for OTT consumer platforms. Roku offers a similar 30% cut of ad inventory and Apple maintains a 30% fee for subscriptions and transactions via its app stores. Starting next year Amazon will also require all Fire TV ads to be served through its network, though they can still be sold by the publisher or broadcaster. “This is going to get complicated,” said one network exec. “Ad revenue was never part of the discussion, and now all of a sudden it is.” More.

The news media company Axios, founded by a trio of Politico vets in 2016, is betting that companies will spend more on non-advertising engagement, such as sponsorships, branded content and events, than on traditional inventory. Axios is reportedly on pace to double revenue to $20 million this year. Two pieces of native content for the Axios site cost $80,000 to $100,000, one media buyer tells Adweek, and a weekly newsletter buy goes for between $10,000 and $150,000. The media startup’s challenge will be keeping prices up and advertisers coming back after the sheen has worn off. “They’re competing against publishers such as Politico and The Washington Post, which have a larger scale and similar offerings,” said Natalya Namts, the associate director of digital investment at Mindshare North America. “The biggest challenge for them moving forward as they compete for more ad dollars is going to be that question around scale.” More.

Shop ’Til You Drop

After being hit with a $3.9 billion fine from the EU Commission last year for anticompetitive practices with its shopping service, Google is being forced to change its ways. Google, for instance, previously incentivized retailers to advertise on meaningless comparison shopping sites to create the illusion of alternatives. Retailers were offered monthly rebates of up to $36,000 and a 20% discount to advertise on these services, which often didn’t work properly and weren’t created for real shopping. Google has since reduced these incentives by nearly 85%. “Ad agencies reaped the benefits of those incentives while Google created the appearance of a level playing field in Google Shopping, as ordered by the European Commission,” writes Search Engine Land. More.