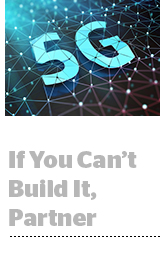 The Race For 5G

Verizon is in talks to partner with Google and Apple to provide online television when it releases its first 5G network in select cities later this year. Verizon fell short in developing an online TV service and wrote off its Go90 streaming service for $658 million, and it hopes turning to a partner will help realize its TV ambitions. It’s not clear how much the service will cost or when it will be released. And the ongoing negotiations still could fall apart, Bloomberg reports. But without 5G TV, Verizon risks falling behind AT&T, which is also developing 5G technology and now rivals Verizon in the media business with its $85 billion purchase of Time Warner and subsequent $2 billion acquisition of AppNexus. More.

Pinterest is approaching $1 billion in ad revenue as it plans for a mid-2019 IPO. The platform hit the $500 million sales mark in 2017 and is on pace to double that this year, sources told CNBC. The app, which has 200 million monthly active users, is seeing momentum with mobile ads and with fashion and beauty brands. Agencies are also turning to it as a repository of behavioral insights. “People are pinning literally what they are interested in,” said Shane Ankeney, president of Havas Media NA. “We use it as a huge insights engine.” But Pinterest’s traction with digital ad buyers has been a slow roll; in 2015, TechCrunch released leaked financial documents that showed Pinterest was projecting $2.8 billion in ad revenue by 2018. More.

AdsWizz, the digital audio ad tech platform acquired by Pandora in March, has launched a podcast partnership program that will integrate its monetization suite with a handful of publishers, hosting and distribution platforms. The integrations will let publishers monetize their podcasts programmatically without incurring switching costs. Partners will get access to AdsWizz’s dynamic ad insertion technology, ad server and SSP. Inaugural partners include Libsyn, Blubrry, Voxnest, StreamGuys and EmpireStreaming. “This will enable any podcaster to offer targeted, programmatic buying on their podcast content, without switching their podcast platform provider, which is a huge benefit for podcast publishers,” AdsWizz CEO Alexis van de Wyer said in a statement. Read the release.

A new loyalty app, Miles, hopes to build a location data and promotional targeting network, The Verge reports. But first, Miles must convince people to trade constant tracking for loyalty points and special deals on products or services. The app gives out the most points for walking or running but also doles out points for biking, driving, booking with a rideshare app or flying. The rewards are small – it takes about 200 miles of walking to earn a $5 gift card to Target or Amazon. But Miles also has targeted offers on behalf of its partners, so car rental companies can target air travelers. The service could have finer targeting controls once (or if) it builds up a solid foundation of data, like Starbucks targeting coupons to Dunkin Donuts loyalists. More.