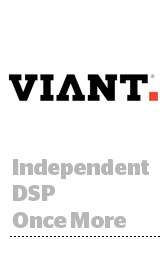 More than a year after Meredith said it would sell off Viant, the ad tech company has found its buyer.

Viant co-founders Tim and Chris Vanderhook said Monday they’ve bought back the 60% stake they sold to Time Inc. in 2016, before Time Inc. itself was acquired by Meredith. They declined to reveal the deal price, though the Vanderhooks sold Viant in 2016 for a reported $87 million.

Post-acquisition, the 300-person company will continue to focus on being an omnichannel, self-serve DSP focused on measurement. “Clients want to know what they get for their money,” Chris Vanderhook said.

The demand-side platform Adelphic, which Viant bought a year after it sold to Time, remains one of Viant’s most prized assets. Adelphic plugs into Viant’s identity graph and powers its self-serve capabilities.

Though it originated as a mobile DSP, Adelphic can now purchase digital out-of-home, video and standard display, enabling marketers to consolidate their spend on the buying platform.

The DSP business has been highly volatile. On one side, there have been numerous strategic acquisitions. Roku bought dataxu. AT&T bought AppNexus. But some platforms have closed up shop. Dstillery shut down its DSP and moved to The Trade Desk.

But the Vanderhooks are confident that being an independent DSP is a good business.

“If you’re successful in building a self-serve, omnichannel DSP, it’s a great business. If you’re pigeonholed or a specialist DSP, your options are limited,” Chris Vanderhook said.

For now, Viant will continue with its data partnership with Meredith, which brought its audience data into the DSP to make it addressable as part of a multi-year agreement. But now that Viant is independent, other publishers could set up similar connections to marry their registration data with Viant’s interest data from its identity graph.