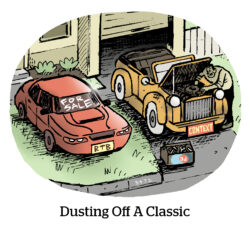 Auto makers aren’t the kingmakers they were in the Mad Men heyday, but it’s a major category and a bellwether for upper-funnel advertisers.

Before 2021, there was little to no advertising for EVs. And Tesla didn’t prompt ad budgets to shift to EV despite surpassing all other car makers in terms of market cap because Tesla doesn’t advertise itself.

Car brands were forced to advertise their EVs last year because there was a shortage of combustion engine cars for sale, due to supply-chain disruptions. Can’t send someone to a dealership if the car’s not waiting there.

Audi outstrips other brands since EV models now take a majority of its ad budget. But it went all-in on EV marketing when it saw that viewers of its EV commercials were almost twice as likely to search for the brand online than viewers of its combustion engine car ads.

Betteridge’s Law says any headline framed as a question can be answered with “No.”

Last year, AdExchanger published “Can These Search Engines Do The Impossible – Peel Market Share From Google?”

It seemed a clear-cut “no” at the time. But Google search faces serious challengers.

A week ago, Brave reported that its MAUs grew from 24 million a year ago to 50 million now. Its Basic Attention Token (BAT) is one of the larger, more credible tokens on crypto exchanges, and since BAT is tied to the browser, it’s incorporated into Brave’s ad platform as a way to incentivize video views or to pay publishers and content creators.

Neeva had a 10,000-person user base last June after its full release. Now, Neeva has some hundreds of thousands of monthly users, according to a blog post last week.

DuckDuckGo is seeing traction, too. Two years ago, it had processed 42 billion total queries. By mid-January 2021, that was 66 billion. Last week, DuckDuckGo announced it surpassed 100 billion queries.

In the same two-year span, Microsoft Edge went from 0% to 6% of the North American web browser market.

And what about Chrome? It’s ticked down in North America lately, although it still has 51% market share.

Loan Sharks In The Water

Facebook is back in the hot seat, this time because of allegedly fraudulent ads for debt collection advice.

Lead-gen services fronting as “debt advisors” faked links to the UK government by using the official crest and even the names of real schemes, such as the Debt Respite Scheme UK. The shady operators stay in business by selling these customers to debt and credit services for a referral fee.

Debt management charities like StepChange that offer this advice for free publicized their concerns in an analysis by The Guardian. Its report revealed at least 35 Facebook pages offering debt support, which collectively spent about $110,000 per month.

The fake Debt Respite Scheme UK page has since been removed.

Official watchdogs, such as the Advertising Standards Authority, are still working out the kinks to regulate unscrupulous advertising practices. But in the meantime, remember not to believe everything you see with your own eyes – especially if it’s a pic of Boris Johnson.

These TikTok stars made more than some of America’s top CEOs last year. [WSJ]

Why advertisers are ramping up more full-funnel marketing strategies. [Digiday]

BuzzFeed’s stock plunge has gone too far. Its market cap barely outpaces what The New York Times just paid for The Athletic, a startup which is unprofitable. (In other words, BuzzFeed just barely makes money.) [The Information]

With a rumored upcoming price raise, will Americans stick with Amazon Prime no matter the fee? [NYT]