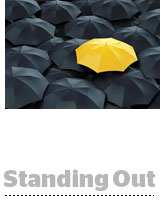 Stick To Your Guns

Perhaps the most enduring difference between Snapchat and Facebook, which has been replicating the younger company’s features at warp speed, is Snap’s disinterest in ubiquity. Higher-ups rejected an internal proposal to make a “lightweight version,” as other social and video-streaming apps have done, reports Georgia Wells for The Wall Street Journal. Leading up to its IPO, Snap defended its focus on North American and European markets instead of emerging economies, and has unabashedly prioritized its iOS product at the expense of cheaper Android models and their sometimes kludgy cameras. But investors are going to want raw user growth after Facebookagram added almost 100 million users last quarter, even if Snapchat’s thinking about the less-sexy average revenue per user. More.

Change On The Fly

Stories are beginning to rack up among YouTube’s rank and file (the comedians, vloggers, activists and entertainers who earn a living on the platform), whose income streams have evaporated under harsher screening Google has put in place. Tim Wood makes ghost-hunting videos on YouTube full-time, but saw revenue plunge from around $4,000 per month earlier this year to $1,600 now. He suspects his channel is being weeded out by scrutiny around words like “murder” and “satanic.” Google business chief Philipp Schindler tells The New York Times he “wouldn’t call it the new reality.” More.

Who Invited The Suits?

Agency groups owned by Accenture, IBM, Deloitte, PricewaterhouseCoopers and Epsilon ranked among the top digital advertising agencies based on 2016 revenue, and consulting firms now account for four of the 10 biggest firms providing advertising services. Accenture Interactive, 18,000 employees strong and on track to hit $6 billion in revenue this year, is the world’s biggest digital agency by revenue. Holding company CEOs may scoff at consulting firms’ creative chops, but it’s easier for these big advisers to acquire creative services than vice versa. “The slickness of a consumer app or the speed at which companies respond to online complaints will do more to form views of the brand than a 30-second TV spot,” writes Leila Abboud. More.

Charter may not be courting Verizon anytime soon [see AdExchanger coverage] if the cable provider completes a just-announced wireless services agreement with Comcast. The operational move is designed to make both partners more competitive with wireless providers like Sprint and AT&T, as The Wall Street Journal reported on Sunday. Although Comcast and Charter have a combined broadband and internet footprint of close to 50 million, both are looking for more penetration into mobile considering Comcast’s looming launch of an Xfinity Mobile service – planned for June. And Charter’s CEO has alluded to similar moves by his cable operator by next year. That’s called synergy. More.

An Amazon partnership with El Pais, Spain’s largest newspaper, gives some indication of the ecommerce platform’s vision for owning the newsstand part of the brick-and-mortar world. Last month, Amazon Prime shoppers in Madrid and Barcelona got free print copies with their delivery. Through May 14, free issues can be requested with a delivery. Later, the newsstand price kicks in. Newspapers are a tough ecommerce sell since the content is often available for free online, but “we believe they are complementary services,” the publishing company owner tells Nieman Lab. “We have closed this deal to reach a new segment of clients.” More.