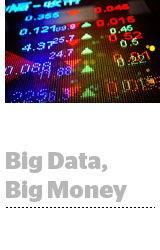 The five biggest publicly traded companies in the world are Apple, Alphabet, Amazon, Facebook and Microsoft. Why? Data. It’s why Tesla, which turns driver data into self-driving AI, is worth as much as GM despite selling 25,000 vehicles in the past quarter to GM’s 690,000. “Vast pools of data can thus act as protective moats,” writes The Economist in a call for new data-focused regulators, instead of size-obsessed trustbusters from the Industrial Age. “On these measures, Facebook’s willingness to pay ($22 billion) for WhatsApp, which had no revenue to speak of, would have raised red flags.” More.

Snap Ads Manager, a self-serve ad buying tool that debuted Thursday, makes all units available for purchase by credit card and should be a draw for SMB marketers. Facebook and Google have similar self-serve platforms, and owning the base of the pyramid is crucial to their -opoly status. But Snap’s media has been heavy on premium buyers and broadcast partnerships, so it could be tough to balance ad quality with the scale it craves. The same was true of Instagram, where CEO Kevin Systrom personally vetted every ad on the platform. That was three short years ago. More at WSJ.

A 33% drop in TV audience ratings over the past four years will make it tough for networks to rationalize another big jump in ad rates. “Advertisers’ businesses aren’t growing 10%, so when you charge 10% increases you’re going to scare people away from TV,” Dave Campanelli, director of national broadcast at Horizon Media, tells Bloomberg News. On the other hand, “agencies try to project a softer market than there is,” says Viacom CEO Bob Bakish. More. Two other advantages for the networks: incremental targeting improvements and renewed marketer appreciation for the “quality” advantage TV holds over digital.

Facebook plans to kick off two dozen original programs next month. The content will live in Facebook’s video tab and is a mix of long-form scripted programs (à la Netflix) and five- to 10-minute spots that refresh every 24 hours. Facebook’s TV push is led by CollegeHumor co-founder Ricky Van Veen, who joined the company as global creative strategy chief in December. Snapchat has mostly partnered with legacy TV companies for content and shared ad revenue, while YouTube has bought and bundled its way into a TV-lite subscription business. Facebook will likely monetize its shows with mid-roll ads and a rev-share model with producers. More at Business Insider.