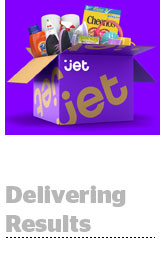 Can Jet.com, acquired by Walmart for $3.3 billion, save the retail giant’s ecommerce operation and, by extension, make it competitive with Amazon? Bloomberg News outlines Jet CEO Marc Lore’s attempt to do just that by putting together a plan to branch out and sell products in newly popular categories, like apparel and especially grocery store items [AdExchanger coverage]. In fact, winning in online groceries is “mission critical” for Walmart, according to a Kantar analyst. Lore, who oversees all of Walmart’s US ecom biz, also hopes to leverage the size of Walmart’s fulfillment center operations and to “rip out the barriers between the store and the ecommerce business that have stymied Walmart.com in the past.” More at Bloomberg.

Snapping Out Of It

The S&P 500 Media Index dropped 2.5% on Wednesday after Turner CEO John Martin said during the company’s Q1 earnings that advertisers are holding back spend. As more consumers cut the cord, traditional TV networks saw their worst-ever first-quarter decline in ad revenues. Turner dropped off 2%, Viacom declined 7.5% and NBCU’s cable ad revenue dipped 3%. To stay relevant as consumer viewing habits shift, cable networks are teaming up with platforms like Snap to create short-form original content for its Discover section on a rev-share model. And networks are willing to give up creative license over their shows to reach Snap’s coveted audience. “We thought we were going to teach them how to make TV, and instead, they are teaching us,” said Barry Poznick, president of unscripted TV at MGM. More at The WSJ.

DigitasLBi will team up with Group Nine Media, which houses brands like Thrillist, NowThis and the Dodo, to exclusively distribute video across the group’s social channels, the agency announced at its NewFront on Thursday. Digitas will create content with its Snacktory platform, which chops long-form assets into social-ready bites. Group Nine will then run that content through its Spotlight platform to contextualize it for its branded social channels. Brands can tap into Group Nine’s 4 billion monthly video views and receive insights and reporting on those buys. More.

The entry price for platforms to stream NFL football games is getting higher for the 2018 season. Verizon will pay the NFL more than $20 million to stream one regular-season football game in London next season, Recode reports. Verizon already has rights to stream prime-time football games in local markets on mobile, but the deal will allow it to stream across all of its properties, including AOL (and presumably Yahoo, when the deal closes). Yahoo was able to rake in 2.3 million users when it streamed the same game last season, largely thanks to auto-playing the stream when users landed on the site. Facebook, meanwhile, bowed out of sports rights negotiations because of the high price and limited advertising rev-share opportunities. More.