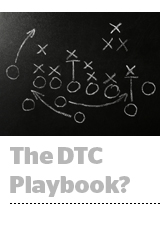 A values-driven brand with the best X in its category launches on Facebook, quickly gains customers and uses data to improve its products and its marketing process. Ever feel like direct-to-consumer brands are all following the same unwritten set of rules? Well, the IAB wrote them down, releasing a guide to building a new-age brand at its IAB Annual Leadership Meeting in Phoenix (71-page deck here). The organization, founded during the digital publishing boom in the 90s, also opened up its membership to direct-to-consumer brands and came up with a list of the Top 250 Direct Brands to watch.

All In The Family

It was only a matter of time. AT&T will consolidate its ad spend on AppNexus, now run by its ad tech unit Xandr. AT&T is one of the biggest advertisers in the world, spending $1.6 billion across its WarnerMedia, DirecTV and AT&T brands, according to Kantar. Programmatic alone clocks in at “tens of millions of dollars each year,” MediaPost reports. The brand will “serve as a case study” for other marketers interested in buying through Xandr, says AppNexus President Michael Rubenstein. AT&T will, however, continue to spend on Google and Facebook as it competes for walled garden spend. More.

Walmart is usually the biggest at whatever it does, but that isn’t true for one important aspect of the business. “We have a tiny ad business,” CEO Doug McMillon told investors last October. With 300 million store shoppers per year and millions of online browsers, Walmart has the potential to rival Google, Facebook and Amazon in the United States in terms of audience reach. What it doesn’t have is the data to connect marketing spend to sales results. Third-party data vendors and tech companies “would get us close to the pin, but not close enough,” says Coca-Cola shopper marketing director Jim D’Isidoro. Retailers can help close the attribution gap, and earn themselves a larger chunk of media budgets. “In an Amazon world, retailers have to make money beyond just selling products,” Tory Gundelach, Kantar’s VP of retail insights, tells Bloomberg. More.

The Target app sometimes changes prices if a user is in a store. The feature was reported by KARE 11, NBC’s Minneapolis affiliate, after a viewer complained that the app showed a lower price for an item she’d just purchased in the parking lot, but when she returned to claim the discount the app jumped up to the in-store price. “The most reasonable explanation is that you just revealed your commitment to buying the product, you’re in the store, or in the parking lot,” said George John, professor of marketing at the University of Minnesota business school. “If you are further away, you haven’t quite committed, so I’m going to give you a juicier deal.” Walmart, Macy’s and Best Buy apps showed no similar price fluctuations on store premises. More.