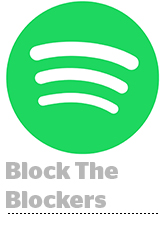 Spotify updated its terms of service late last week to ban ad blockers. “Circumventing or blocking advertisements in the Spotify service, or creating or distributing tools designed to block advertisements in the Spotify service,” can lead to suspension or termination of an account. Spotify revealed in its IPO that 2 million people, about 2.3% of users of its ad-supported content, ran modded, ad-free versions of the app. Since then, Spotify has tried to crack down on rogue listeners. The terms of service update, which comes into effect in March, will give the app more freedom to terminate accounts without warning, The Verge reports. Pirated streaming is a double-whammy for Spotify, which has to pay artists for the engagement despite not getting any ad revenue and gets miscredited in post-campaign attribution because of the missed audience. More.

By Crook Or By Commerce

Facebook’s steady move into shopping continued with its acquisition of image recognition startup GrokStyle on Friday. GrokStyle’s AI and visual shopping technology, used by retailers like Ikea, lets people take a picture of an item to see reviews or similar products. While it’s not clear how Facebook will use GrokStyle, it could be useful for Facebook Marketplace, the Craigslist competitor it launched in 2016, and especially Instagram, where ecommerce and shopper marketing are a key part of Facebook’s plan. More at Bloomberg.

Apple has told some companies that they must re-submit apps that record screen activity or risk being booted from iOS and the App Store. The announcement followed a report by TechCrunch of some popular travel, finance and shopping apps using “session replay” technology, which essentially screenshots every second of interaction with an app. The analytics was promoted as a way to see how people interact with the app or troubleshoot user issues. But the practice could also expose sensitive data, including unencrypted credit card and passport data, if an employee or hacker accessed the session replay images. “Our App Store Review Guidelines require that apps request explicit user consent and provide a clear visual indication when recording, logging, or otherwise making a record of user activity,” according to an Apple spokesperson. More.