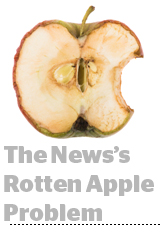 Apple News Plus, the $10 per-month news bundle Apple launched in March, is headed back to the drawing board after a rough debut. Revenue from the service is split 50/50, with half going to Apple and publishers splitting the other half based on their share of the readership. But that revenue to date has been immaterial, publishing execs tell Business Insider. Some publishers, including The New York Times and The Washington Post, declined to join in part because the ad revenue isn’t worth potentially cannibalizing their own subscription business. There’s some reason for optimism though. The company has a way of producing “flops” with immense scale, as it did with Apple Watch and Apple Music. Publishers are going to stick it out with Apple, too, because so much value has recently evaporated as Apple puts the lid on iOS and Safari tracking data. More.

Martin Sorrell has had a storied career in the advertising industry, from building WPP from scratch to very publicly resigning from his empire in 2017 to launching his second act, S4 Capital, just a few weeks later. Sorrell, who built WPP into the world’s largest advertising conglomerate, had always assumed that “he would leave WPP in a coffin,” writes The New York Times. But when WPP began underperforming in 2017, his retirement became more urgent to the board. Sorrell left in a rage after a leak to The Wall Street Journal accused him of misusing company funds to visit a prostitute. He waited “about three minutes after he quit WPP” to launch S4, which promises to do what WPP does for clients but “better, faster and cheaper.” Now, WPP’s previous CEO takes any opportunity to jab at his former empire and the decisions made by his successor, Mark Read. The piece evokes Sorrell’s personality, which David Segal describes as “part pugilist; part charmer,” as well as his reputation as an “exacting, exhausting” boss who seems to be “in a perpetual state of overdrive.” More. Go deeper: Listen to AdExchanger’s recent podcast with Sorrell.

Speaking of changes at WPP: Bain Capital is in exclusive talks to buy a majority stake in WPP’s Kantar that would value the market research firm at $3.8 billion. The private equity giant is entering final negotiations with WPP after submitting the strongest offer in the bidding process, which included Apollo Global Management, Vista Equity and Platinum Equity, Bloomberg reports. WPP has been shopping Kantar and other assets for months as it trims its sprawling agency businesses. CEO Mark Read has led the reorganization since he took over last September. WPP founder and former CEO Martin Sorrell was a strong proponent of hanging on to Kantar, despite its underperformance compared with the rest of the group in recent years. Talks between WPP and Bain are ongoing, but the sale could close as soon as this week. More.

Time Out Group, which publishes eponymous magazines and news sites in major cities, is betting big on its new food markets group as a way out of the failing media business. Trying to work with or around Google and Facebook at their own digital ad game is a lost cause, Time Out CEO Julio Bruno tells the Financial Times. The company opened its first market in Lisbon in 2014, and has since discovered that the 4 million yearly brick-and-mortar visitors there are particularly valuable. “You go to the market and you want Wi-Fi, and have to enter your email. Then we have your email,” Bruno said. “We have POS [point of sale] system, so we have info about what you’re eating.” Investors are on board, and Time Out’s stock price has gained more than 50% so far this year. More.