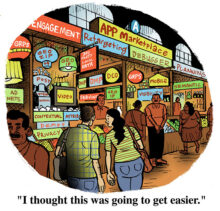 The Disney Advertising Sales group just launched its own data clean room, with assists from the first-party data service providers Snowflake, Habu and InfoSum. It’s no coincidence that earlier this week Snowflake unveiled its Media Data Cloud, a platform to combine first-party data sets for advertising and analytics with Disney and Habu as pilot partners. Broadcasters are enthusiastic about clean room services because programmers have reliable links to viewers who are logged into OTT services or have monthly subscriptions. The goal, of course, is to monetize those first-party audiences, but that doesn’t work with upfront guaranteed deals sold against Nielsen ratings. With a smart TV or OTT operating system, however – think Roku TV, Fire TV, Android TV or Samsung Tizen – there’s a chance for real-time ad insertion sold against an actual user or household ID. It’s notable that Disney’s announcement does not cite major cloud marketing companies such as Google and AWS, focusing rather on the data and identity vendors that operate across channels. “It was important for our clean room offering to be cloud agnostic to provide brands with scale and variation,” Lisa Valentino, Disney ad sales EVP, said in a statement.

A One-Year Window For TV Measurement

One of the biggest beneficiaries of Nielsen’s slow-motion train wreck this year must be VideoAmp, the video advertising measurement startup. Case in point, VideoAmp just raised a $275 million investment round at an eye-popping $1.4 billion valuation. That’s a serious jump from 2019, when VideoAmp raised $50 million with a $200 million price tag, The Wall Street Journal reports. VideoAmp is a potent challenger to Nielsen because its roots are in linear but it’s also known for data-driven video. Customers use it for YouTube ad serving and analytics, as well as for being an early measurement partner in first-party data services, such as Google’s Ads Data Hub and Snowflake’s new Media Data Cloud (see above). But VideoAmp is also a proponent of TV panel data via partnerships with HyphaMetrics and TVision. VideoAmp’s co-founder and CEO, Ross McCray, said the funding will compress three years of product road map work into one year. Notably, Nielsen is in hyperdrive to get to market with Nielsen One, a cross-channel currency to replace the Nielsen linear standard ratings, with plans to launch one year from now.

Google Android halved its subscription and in-app purchase fees to 15% for all developers. Larger apps previously paid a 30% commission. The fee change will help Android developers build for the next generation of connected hardware. “While apps remain incredibly important for mobile phones, great services must now also span TVs, cars, watches, tablets and more,” noted Android product management VP Sameer Samat in a blog post. “And we recognize that developers need to invest in building for those platforms now more than ever.” Microsoft also made big app store changes this year, likewise cutting baseline fees from 30% to 15% and opening up its app store to Android apps and alternate payment providers. Google and Microsoft may see a chance to win over developers who are frustrated with Apple but still spend most of their time and resources on iOS. These fee cuts are an important line in the sand for the industry. Last year, during antitrust hearings in the US and EU, Apple defended its 30% app store services fee on the grounds that the rate was an industry standard. That claim no longer holds water.

The battle of the streaming gatekeepers is only just heating up. [The Information]