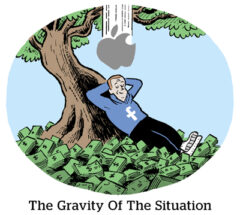 When Google said earlier this year that it wouldn’t support email-based identifiers, it also made a concession to publishers called publisher-provided IDs (PPIDs). Now, PPIDs – which are primarily based on emails collected by publishers – will be available to Google DV360 advertisers. That’s a big advantage for DV360, but Google is also tossing a bone to third-party ad tech in the form of encrypted IDs, which serve a similar purpose as PPIDs by matching publisher audience data to first-party brand data. For instance, after Google initially spiked email-based IDs, LiveRamp assured customers that audience-matching would still work with Google publishers, albeit only via private marketplace deals. Though there is a slight but important difference between encrypted IDs and Google’s pseudonymized first-party IDs (aka PPIDs), which is that encrypted IDs might run afoul of regulators. Encryption can be broken, and if that happens, so-called encrypted IDs would point back to individuals. PPIDs will become more important as publishers press for alternatives to third-party cookies. Apparently, the presence of a PPID raised bid rates by 15% when no cookie-based identifier was available. “Given the feedback we’ve heard from partners, we have prioritized this product area,” Steve Swan, a Google Ad Manager product manager noted in a blog post.

Mark Zuckerberg fired his latest broadside in the cold war between Apple and Facebook on Wednesday. In a Facebook post, Zuck wrote that the company (guess we’re talking about Meta here) is laser-focused on the metaverse and “unlocking opportunities” for content creators to get paid. “The 30% fees that Apple takes on transactions make it harder to do that,” Zuck snarked. Facebook’s work-around to Apple’s triple tithe is to give subscription publishers and creator accounts promotional links to sign up subscribers. That means revenue is collected via credit-card sign-ups on the web where Apple has no fee. Apple previously went after apps that directed users to the web for work-around payments – but that specific policy is the one count Apple lost in its recent court fight with Fortnite developer Epic Games. Apple is no longer allowed to punish apps for sending iOS customers outside the iOS app for payments. Zuck also said Facebook will allow publishers and creators to download email addresses for all their subscribers through the platform, another shot at Apple, which has been clamping down on email data.

Newsletters And The News

The New York Times saw its profits soar with a rebound in its ad business. [WSJ]