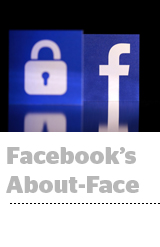 Dear World, Trust Us. Your “friend,” Mark Zuckerberg. Facebook’s beleaguered founder and CEO penned a lengthy post on Wednesday promising a top-to-bottom privacy overhaul of the House That Zuck Built, from encrypted messaging to secure data storage. “As I think about the future of the internet, I believe a privacy-focused communications platform will become even more important than today’s open platforms,” Zuckerberg (or his PR and legal teams) wrote. “Privacy gives people the freedom to be themselves and connect more naturally, which is why we build social networks.” We, kemosabe? File this post under “We’ll believe it when we see it.” Read the full post here.

A new data onboarding service will be released from Live … Intent? Known for placing display ads in email, LiveIntent has used onboarding services before to bolster its core offering. The new offering, due in April, has its roots in the company’s 2015 acquisition of onboarder Mojn. Advertisers can use it to connect their segments to publishers’ first-party identifiers. It’s a standalone service, separate from the core LiveIntent product, that is intended to appeal to smaller publishers. More.

Amazon is exerting more control over its vendor marketplace. Thousands of brands that sell through Amazon were unceremoniously informed this week that their purchase orders would not be renewed. What does it mean? It could be Amazon’s attempt at “trimming the fat,” according to Digiday. Most of the impacted vendors do $10 million or less in annual sales volume on Amazon, and many specialize in selling bigger, bulkier products that cost more to ship. “It’s fairly obvious at this point that Amazon is starting to dictate where certain brands and how certain brands can sell on their platform,” says John Ghiorso, CEO of a full-service Amazon agency called Orca Pacific. More.

Munchery, an early player in home meal-kit deliveries, declared bankruptcy this week, and its filing opens an interesting window into ecommerce brand growth and venture capital investments. Steadfast Venture Capital managing director Dave Ambrose tweeted the relevant parts. “The business model relied heavily on the ability to attract new customers, which became more and more difficult as the market evolved,” said former President and CEO James Beriker. When well-funded performance marketers from competitors like Blue Apron, Plated and Grubhub entered the fray, they drove up rates for the same search and social traffic. They also increased churn and decreased customer lifetime value estimates. “The erosion of these fundamental operating metrics undermined the business models of many if not all startups seeking to develop long-term sustainable businesses in food delivery.”