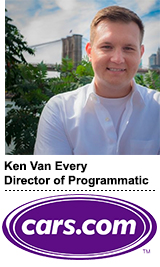 Cars.com knows that most people shopping for a car come to its site, which creates some of the best in-market auto data available.

The only downside? The higher the quality of data, the smaller the audience for marketers to target.

Cars.com counts about 7 million people in-market for cars at a given time. In contrast, three of the largest data providers offer “in-market” modeled segments that respectively include 103 million, 107 million and 210 million people in the auto shopping bucket, observed Cars.com director of programmatic Ken Van Every, who joined a year ago from demand-side platform dataxu.

“Nearly everything through publicly available data marketplaces is modeled to frightening levels,” Van Every said.

Instead of expanding its data set of in-market auto, Cars.com wants to find ways for auto advertisers to use its quality data to reach their prospective drivers across addressable TV, connected TV, social media and audio.

The ability for brands to use Cars.com data to show auto ads on addressable TV is still in the contract stage, but on social media it’s up and running. When Facebook pulled third-party data segments from its site post-Cambridge Analytica, it created a new way to share data that benefits Cars.com: Advertisers can use Cars.com data for their Facebook buys while still managing the campaigns themselves.

Here’s how it works: After setting Facebook pixels across its site, Cars.com creates segments from that site behavior for its consumer marketing team to use. Cars.com then shares that segment with the advertiser’s Facebook Business Manager account. Cars.com can monitor the use of the data while the advertiser runs its campaign.

But not everyone visits Cars.com, so it is expanding its data set by “building look-alikes in a sensible way that creates additional scale but doesn’t diminish quality,” Van Every said.

Cars.com also avoids polluting its data by buying site traffic. Most visitors arrive at the site after typing in the Cars.com domain name. Others come via organic search. Traffic is growing. When Cars.com does promote its site, it focuses on “buys in well-lit corners of the internet” to avoid reeling in bad or fake visitors who will create false signals. Eighteen million people visit a month.

“We want to protect our advertisers as well as our seed audiences from nefarious buys,” Van Every said. He sees other publishers buying traffic and exposing ads to users they bought, which compromises data and reduces performance.

But Cars.com’s strategy only works if advertisers see the value in a smaller, higher-quality data set. To that end, it applauds auto advertisers moving away from chasing cheap cookies in the open exchange.

“There is a reckoning happening in the automotive data space,” Van Every said. “More of our clients are sourcing our data, as well as second-party data segments, vs. the blown out third-party auto segments, and they’re being more strategic about the auto segments they’re targeting.”

While Cars.com won’t cheaply scale up its data, it does want to make it easier to use. Off-the-shelf, third-party data is easy to find and buy in a DSP. Some DSPs will randomly pull in and test different data segments, Van Every said. Not being in a data marketplace prevents clients from discovering Cars.com data.

But Cars.com can’t put its data in a public marketplace, because it’s not safe. Competitors could target their audience to grow their own, and conflicting buyers could resell Cars.com’s data.

“As soon as you make your data public, you lose all control,” Van Every said.

Cars.com is in the early stages of finding a solution that will protect its data while still allowing its advertisers to use it in their DSP – similar to the approach on Facebook. Data will become easier to use, but it won’t be cheaper, because Cars.com “will never water down our audience.”

Being able to bring its data into more programmatic buying will help Cars.com adapt to changing buying patterns. Auto advertisers typically book 70% to 80% of their inventory for the year upfront. But increasingly, they’re moving more dollars to programmatic or using programmatic guarantees for the upfront – making data even more central to Cars.com’s offering.

“Our North Star,” Van Every said, “is using the 20 years of data we have in our pocket.”