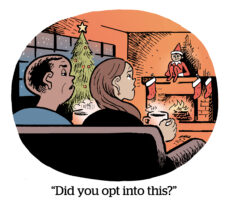 The IAB announced last week that advertising and media agencies will now be able to join the industry trade association as members. All the big agencies are already partners out of the gate.

The IAB makes the case that online advertising must span many categories to work effectively, and the industry needs a trade group that spans those other categories as well. “IAB has long served as the industry’s only ‘big tent’ where stakeholders across the entire digital ecosystem gather,” according to the blog post announcing the change.

On the other hand, in expanding far beyond its roots, the IAB has opened up opportunities for other industry associations (namely, Digital Content Next, which reps many news companies) to become powerful stakeholders among web publishers – which was the IAB’s original home turf.

The IAB first added ad tech companies as members in 2014, many of which were brought in as representatives for publishers. Soon, the walled gardens were the biggest sponsors and dues-paying members. In 2019, brands were allowed in.

P&G-owned Old Spice and Netflix announced a marketing deal to produce a line of products based on the show “The Witcher.” The joke is that the deodorants reek, with names like “Roach,” “Geralt's Bathwater” and “Kikimora’s Corpse.”

To win a deodorant stick, people must fill out a quiz related to the show and provide their information to the brand.

There’s been a somewhat alarming wave of gimmicky first-party data-collection initiatives from well-known brands that don’t have the opportunity to collect much direct consumer data of their own.

These products are all available by raffle if users provide contact info or through an ecommerce channel as long as supplies last. Regardless, though, all of these stunts are about the data and not the product.

Kids are spending record time on screens – and their toys are getting more connected, too.

According to research group Transparent Market Research, smart toys are primed to become a $70 billion business by 2026, Axios reports. Parents looking for new ways to entertain their kids will need to tread carefully around the privacy dangers posed by toys that literally listen.

It’s easy to see why tech-backed toys that engage children in interactive fun have a much higher educational value than just clicking around on an app.

But the trade-off is how much personal information might be picked up by these internet-connected, microphone-enabled devices – and, alarmingly, how they might potentially be used for nefarious purposes if they pick up malware (which is a risk for pretty much anything that connects to the internet).

TikTok is changing its algorithm to prevent users from going down harmful rabbit holes. [9to5Mac]. The move follows reports of TikTok users, often young girls and teens, who were served dangerous content such as emaciated images, purging techniques, hazardous diets and body shaming by the platform’s algorithms. [WSJ]

The ad market has expanded for the ninth consecutive year, posting its best November ever. [MediaPost]