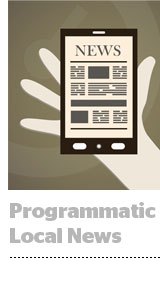 More than 1,700 publishers belong to the Local Media Consortium (LMC), and not all of them are experts on programmatic.

The organization, which operates a local news ad exchange and negotiates technology deals for its members, counts massive publishing groups like Scripps, McClatchy and Tronc as its members, along with single papers like The Seattle Times, Boston Globe and Tennessee Valley’s Decatur Daily and broadcast stations such as WRAL in Raleigh, NC.

Back in 2013, the LMC formed an exchange through Google. Buyers access a pool of inventory devoid of fake news. Sellers get a premium for their inventory but can blind their inventory to avoid conflict with direct sales.

The exchange is growing quickly. Two billion ad impressions a month are available for purchase through its exchange, up from 1 billion impressions the year before. Revenue generated by LMC partners, including through the exchange, totaled $110 million last year, up from $62 million in 2015.

“When we bring people on board as members and get them into our exchange, they see a lift that’s sometimes as low as 15% and sometimes as high as 70%,” said Rusty Coats, executive director for the LMC.

For members to get the full benefit of the exchange, they need to do more than flip a switch.

Many of them don’t have the resources to make programmatic as efficient as it can be and they leave in ad networks or exchanges that long ago should have cut from their waterfall.

“They can have a waterfall with a million passbacks and lots of inventory is lost because they don’t have the waterfall set up right,” Bennett said. And as viewability becomes a more important metric for advertisers, many need assistance to rework their sites to improve viewability scores.

Bennett also taught these local media publications how to use reach extension for their campaigns.

“There are times when you would be better off selling your inventory purely programmatically and moving direct-sold inventory into the extension space,” Bennett said. “You might be able to buy those impressions for less than if you’d been able to sell your impressions on your own site,” a tactic commonly used by larger news publishers.

“They worry that it’s going to see a massive impact on direct-sold and if they turn that on, none of their direct-sold inventory will fulfill,” Bennett said.

Because of antitrust concerns, the LMC has some inventory price limits that will affect how it adopts automated guaranteed deals.

LMC members don’t collaborate on pricing. Publishers set their own floor price, and buyers target LMC inventory. Negotiating a fixed price deal, like in programmatic guaranteed, will pose a challenge, Coats said, though the group is working on a solution.

The LMC counts blue-chip brands like Honda and Disney among the top buyers in its platform. And it’s hoping the current climate, which has seen many brands flee from fake news sites, will benefit its members.

“I wish there was more stridency about putting advertising in brand-safe, credible content versus networks where as a buyer you know they are going in sketchy places.”